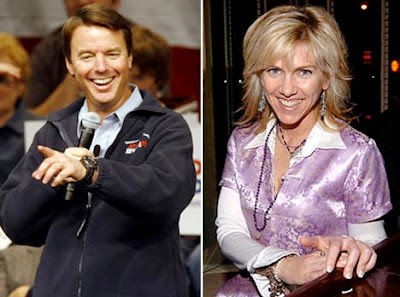 In the world of politics, rare is the candidate who passes on a chance for publicity. The campaign's explanation for stonewalling, moreover, struck me as dubious and at times evasive.

I had come to the Edwards' videos in a haphazard way: the byproduct of a story I was writing on new technology and politics. The webisodes were not, in any regard, a secret. Edwards' "behind the scenes" portrait had earned rave reviews in the blogosphere and even a small feature in Newsweek. But nothing had been written about the films since Edwards announced his presidential aspirations, and I wanted to know how the footage would play on the campaign trail.

What followed was a lesson in the profound irritations of political reporting. A call to Edwards' press shop led to an email to his One America Committee representative, which led, in turn, to a mind-bending exchange about campaign finance law, which culminated in a separate conversation with Edwards' deputy campaign manager Jonathan Prince. Each time I was told that the One America Committee could not use "material that could be considered promoting the presidential campaign," and that Edwards' camp "no longer had access to most of the content."

Thwarted, I tried my hand with the movie's producers. A search for the filmmaker, Rielle Hunter, proved that Google does, in fact, have its limitations. No hits. The same held true with Facebook and Myspace - a bizarre level of anonymity for someone in the movie business.

The production company responsible for the webisodes, Midline Groove Productions, had a minimalist website. Through it, however, I was able to email Mimi Hockman, Rielle Hunter's partner, to ask if I could screen the tapes. She directed me to a Business Week website where the last remaining webisode link still functioned. But beyond that, I was rebuffed. Once again, the reasons seemed strangely artificial.

"Our contract expired last year," Hockman emailed, "and the Edwards camp owns all of the webisodes and footage."

(Hmmm.... The campaign had said it couldn't access the footage.) Could we at least talk off the record about the filming process?

My reportorial curiosity thoroughly piqued, I decided to dig further.

Who is Rielle Hunter? The Newsweek item said Edwards met the aspiring actress and filmmaker in a New York City bar. A call to the Screen Actors Guild elicited the following exchange:

HuffPost: "So if I wanted to contact her about her work with web video?"

SAG: "Well, I don't know what to tell you. It's up to the performer to choose whether they are listed or not."

A check of the movie database IMDB.com listed her as a director and actor in the short Billy Bob and Them. And an Internet write up of a 2005 interview she apparently gave to Breathe Magazine described her as a "formerly hard-partying girl who claims that she found enlightenment."

Who else was involved? Credits from the webisode still on the Business Week site listed three additional production assistants. One of them, Sam Cullman, said he could not talk to me but lauded Edwards for his openness. Another assistant, Nick Chatfield, said on the first call to my editor that he wished the movies were available because he could use the publicity. On the second call (having evidently checked back with Hunter or the Edwards campaign), Chatfield said, "Don't call me again."

Most important of all: Was there, in fact, a legal reason that prohibited Edwards from showing the webisodes? One campaign finance expert told me that, "if used by the presidential campaign, the videos are considered an in-kind contribution, which is limited at $5,000 in value... Still," he added, "this is an abundance of caution." Others didn't tread as lightly. "Bullshit", "baloney", and "malarkey" were the words used by three eminent experts in the field to describe Edwards' stance.

Presented with this record, the Edwards campaign finally relented. But even then they proved surprisingly guarded.

Jonathan Prince offered to let me and my editor, Tom Edsall, watch the videos - apparently unaware that at one point his campaign claimed not to have access to them. But there was a proviso: we could only view the videos in Prince's presence.

We accepted the offer. But oh, how the story and my interests have changed. No longer am I working on a piece about new media and politics - boring! Now, I just want to know why these webisodes are shrouded in such mystery.

Not lost in the matter is the irony of Edwards' stance. After all, the videos were made with the apparent goal of bringing transparency to the political process. "I've come to the conclusion I just want the country to see who I really am," Edwards declared in the one webisode still public, "not based on some plastic Ken doll you put up in front of audiences."

-- Sam Stein, in (what seems to be) the first reported "problem" surrounding John Edwards and Rielle Hunter, in the Huffington Post

This reminded me, so much, of how I uncovered the NewAge reasons for my divorce, reading it gave me chills: My ex, and her girlfriends (Nadia Eisen, in Luxembourg, especially) outright lying - or saying things that just made no sense. That clear feeling that something was off-kilter that no one would cop to. A sense they were all determined to convince the one person who was telling the truth and living in this reality - me - that I'm the one off-base and/or crazy and they were being truthful and acting as protectors of the good. And the mind-warping hatred these "peace and love" types developed towards me when I wouldn't quit trying to discover what was going on.

Every one of them, a liar, and a bitch - and that goes for the New Age Dr. Robert Wohlfahrt, too - the quack in Wissembourg, France, who doesn't abide by professional ethics (or his medical training) and, instead, started my nightmares by taking advantage of my stupid, evil, mixed-up woman during the grieving period of her mother's death. He's as big of a bitch, and a faggot, as John Edwards. And, just like Edwards, he will be exposed. I'ma see to it.

Does anybody have a photo of this creep, Wohlfahrt?