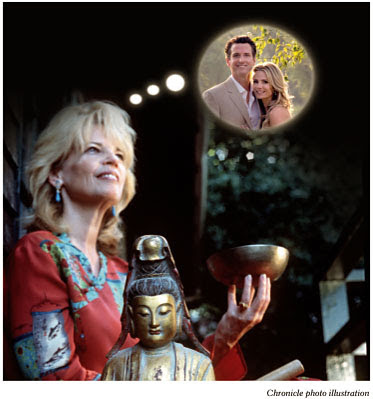 Although Simone (who long ago professionally dispensed with her first name, Carol) says her psychic readings days are largely behind her, she has come up with a few predictions:

On Newsom becoming governor: "I get a very positive energy about that. It's clear this is something he would like to do and he has a very strong personality, and I feel he'll get it."

On Newsom and Siebel having kids: "Definitely."

And on the chances of Newsom landing someday on a national ticket?

"It's all up to him. The work he accomplishes within himself will determine how far he goes," Simone said.

The onetime Silicon Valley ad executive, radio host and author of "The Goddess of 5th Avenue" has spent more than two decades exploring the metaphysical.

These days, she's affiliated with the Palo Alto School of Hypnotherapy where, according to her Web bio, she "helps people rekindle their inner light and strengthen the ability to respond creatively to life."

"I used to do (psychic) readings, astrology, numerology and all the metaphysical arts, but now I'm more interested in helping people quiet the mind," she tells us.

Simone says she was introduced to Gavin by Stanlee Gatti, their mutual friend, socialite wedding planner and fellow spiritual devotee.

That led to Simone sitting down with the mayor and his fiancee at Newsom's San Francisco penthouse a couple of months back to "talk about his internal life and where he's at," and to plan the couple's vows.

"Gavin wanted something less traditional and very contemporary," Simone said. The upshot was a ceremony that invoked nature and the Indian tribes that inhabited the Montana region where the couple tied the knot.

"I alluded to them in the ceremony as an eagle and a dove, and how they have to fly high and stay focused on each other because they are traveling all the time ... and being pulled apart by the world," Simone said.

And you thought Nancy Reagan's astrologer had the corner on political metaphysics.

-- Phillip Matier and Andrew Ross, confirming what I've said all along: the San Francisco mayor, Gavin Newsom, is a lying, crazy, asshole NewAger - and "reporters" of today don't practice journalism - though they're on the SFGate.