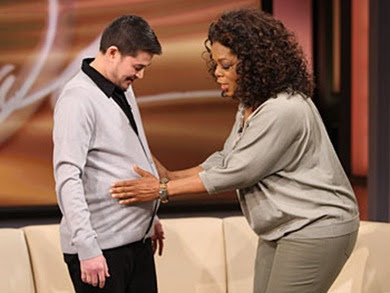 By the time Thomas Beatie, "the Pregnant Man," strode across Oprah Winfrey's stage on April 3, his story had already become a worldwide phenomenon. Beatie -- a transgendered man who was born a woman and became pregnant through artificial insemination -- had captured headlines, and worldwide attention, in the preceding weeks. On the show, Oprah clutched Beatie's belly like a touchy aunt and asked him nosy questions about his family, his sex life and the appearance of his clitoris. ("It looks like a penis," he answered, uncomfortably.)

The episode -- which garnered a 45 percent audience increase compared to the same time slot in the previous week -- was actually one of the more nuanced moments in a bizarre uproar over a bizarre pregnancy that became fodder for news anchors and late-night comedians. The night before, David Letterman had aired a top 10 list of "messages left on the pregnant man's answering machine." No. 1 was, "Michael Jackson here -- just wanted to reach out to another androgynous freak show."

The transgender community has often been caught in the shadow of its gay and lesbian brethren, and Beatie's story offered an opportunity for some much-needed attention. But with the spotlight hopelessly focused on such salacious details as Beatie's genitalia, and the story becoming little more than a punch line, it has left many transgender activists wishing the Thomas Beatie media circus would simply go away.

-- Thomas Rogers, on a media lie that (once again) Oprah helped to perpetuate, for Salon.com.