The Cult Of Obama (Update) 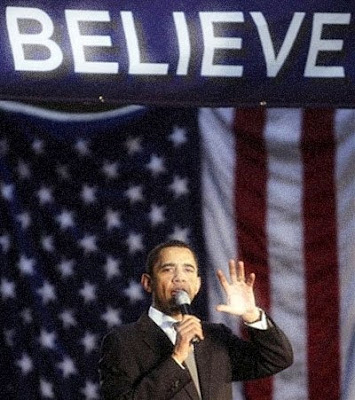 "Watching tens of thousands of Germans listen to his worldly appeal that 'this is our [who is 'our' exactly?] time,' voters back home may not be impressed."

-- Jennifer Rubin, on what Barack Obama has done wrong during his overseas trip, for Pajamas Media

I love that question - "who is 'our' exactly?" - because it shows that, without the frame of NewAge beliefs (and believers), Barack Obama's words and actions make no sense - just as nothing else about this campaign makes sense:

All the "Lightworker" claims, which the media fails to seriously dig into.

Oprah's early (and continuing) role - as she also pushes Eckhard Tolle cult seminars, The Secret, and other NewAge beliefs, and quackery - all that have no place in a political campaign.

Michelle Obama's insistence on saying silly NewAge things, like Barack is going to heal our souls, etc., that have no place in a political campaign.

Barack's insistence on saying silly NewAge things, like he's going to lower the level of the oceans, etc., that have no place in a political campaign.

The media (which regularly feeds us NewAge beliefs without skepticism) acting in a highly unusual, unquestioning, cultish, fashion - around a candidate with no experience, no paper trail, or content to his speeches.

Barack Obama's own campaign's reference to his followers as "the cult of Obama," but doing nothing to dissuade such thinking - just as the media is refusing to report on it.

Only when seen through the frame of the NewAge cult movement does any of this cohere into a narrative that reflects the reality we see:

That of a political cult.