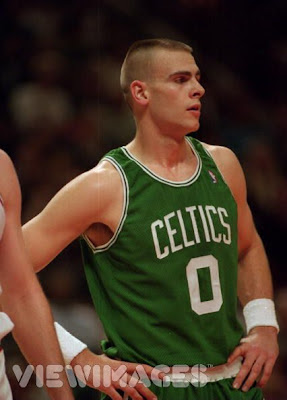 Here's where things get weird: five days later, a right-wing blog called Death By 100 Papercuts received a tip that the house Hunter had moved into was owned by a former NBA player who had contributed money to the Edwards campaign. Doing some digging, Doug Ross reported that the only former NBA player who had donated money to Edwards was Eric Montross, a UNC graduate who was drafted by the Boston Celtics back in 1994 and ended his NBA career in 2003. Montross gave $4,600 to Edwards during the 2008 election cycle; he was described as a "big backer of John Edwards' White House bid" by CNN. (Edwards went to UNC law school.)

Now. An Intelius search reveals that Montross does indeed currently reside in the Governors Club gated community, so that jibes with both the Enquirer's initial reporting as well as the subsequent blog tip. When we speculated yesterday that the house Hunter had been living might have belonged to Montross, a commenter named "RielleHuner" posted the following:

The moneyman was Celtics player Eric Montross who also has been paying $8500 a month to ex-Edwards campaign manager Andrew Young, who coincidentally acknowleged [sic] untested paternity of female baby Frances Quinn Hunter-Edwards on her birth certificate.