Clear Your Mind - And Give Us A Hug! 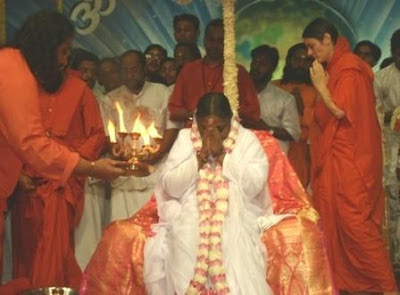 "'Mataji' is really our play." The house it's set in could belong to any of the cast. The play skewers India's penchant for exporting gurus and god-men. Some promise to manifest themselves on the moon. Others conjure up Rolex watches or cure cancer by touch. Saraf's Mataji hugs.

There is a real hugging saint, Amma or Mata Amritanandamayi Devi (above) who touches down every year in Castro Valley. Saraf says she comes complete with Amma dolls, jewelry and medallions, all of which she's touched once. Thousands of devotees, Indians and non-Indians, line up for hours to get a hug. 'Don't they see there is something funny about a woman who hugs for a living?' he asks incredulously. He's dumbfounded that so many people he knows, many of them rational engineers 'of scientific temper,' seem to swallow her 'miracles' without question."

-- Sandip Roy, on Sujit Saraf's Bay Area theater group Naatak, and their play about the on-going Western lunacy of cultish thinking - even in "science" circles - for the SFGate.