"I'd kind of written him off in a snobbish way, like, 'Oh, he's the guy who made Eastern philosophy accessible to Westerners' and I was like, wait, I know nothing about Eastern philosophy. He's written 50 books, he's a medical doctor, he's an amazing thinker."

- Beth Lisick on Deepak Chopra (above) who's labeled, in this account, as a "spiritual healer", rather than someone striking people stupid.

See, this is why I wish sheeple (Except for Oprah, almost always white women) and, especially, my friends would leave New Age con artists alone: These cult followers (and that's all they are or seem to secretly aspire to be) don't have a clue what they're looking for, or talking about, and, whatever it is, they always return to the real world without their clothes and/or money.

Smart man. He stays out of a lot of trouble that way. (The kind of trouble people, like Beth, want to put him in,...with people like me:) Got that, Beth? "He's written 50 books" because - just like your sorry ass - he's just a "writer",...and nothing more.

Is he, like, a prophet? He tells Stephen Colbert (in the clip above) he is: But only if it's spelled p-r-o-f-i-t. Nice, huh? No claims on God, or to 'the other side" - or *anything* - but merely a spinner of so-called spiritual-sounding tales. (And a pretty tired-looking one, for somebody who writes anti-aging books,...) In other words, Deepak Chopra is just another dickhead with a laptop, talking about woo, trying to take up *somebody's* time and money - and succeeding at it - because idiots, like Beth, have too much of both to notice.

Really, the only thing that's "amazing" is that, by 2007, supposedly-educated, jaded, post-punk Americans, like our Beth, are still allowing him/helping him to get away with it. Beth's helping him,...because she's, apparently, figured out an angle for getting a little scratch out of it too. (Fuck everybody else. Hell, from the sound of that Lisick pull-quote, I bet she'd even fuck Chopra. Word to "Mr. Lisick": Think, Man,...this stuff is "magic" for marriages. Just check the divorce rates to see: They correspond perfectly with Self-Help's popularity.)

Beth also claims Tupak Okra is "a medical doctor" but that's not *exactly* true either since, as former president of the American Association of Ayervedic Medicine, he'd qualify to most real medical doctors as an Indian witch doctor. One who (because of the gullibility of the Baby Boomers and their offspring) has gotten away with practicing his particular brand of bullshit on Western citizens for far, far, too long.

And how do I know this? Because Chopra made himself, and Eastern philosophy, "accessible" to most Westerners-In-The-Know by originally being involved in The Maharishi Caper, the medical scandal that came about after his perverted leader, the so-called Maharishi Mahesh Yogi, was already roundly dissed, by The Beatles, for trying to molest Prudence, Mia Farrow's sister.

(Question: Why doesn't anybody pay attention to that? The fact that John, Paul, George, and Ringo - especially Ringo - dismissed all this nonsense? Doesn't Beth Lisick - or the press - know how to use Wikipedia when it comes to New Age bullshit?)

Here, try this line if you want to consider Deepak's ethics - or his "Ayervedic" credentials:

"[Chopra] misrepresented Maharishi Ayur-Veda as India's ancient system of healing, rather than what it is, a trademark line of "alternative health" products and services marketed since 1985 by the Maharishi Mahesh Yogi, the Hindu swami who founded the Transcendental Meditation (TM) movement."

Whoo-hoo! Sign me up! That fact alone screams "Trust me!" doesn't it? It's no wonder DC's had such a brilliant career with a background like that to lean on! It's also no wonder he spends so much time telling people not to believe in this reality,...he's too busy trying to steal it from them! 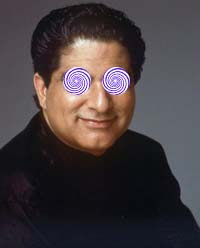 If your auto mechanic had a background that started with ripping people off, you wouldn't go to him, but that doesn't stop these poor delusional bastards, with more money than sense, from lining up in front of those who are more-than-willing to take advantage of them. And, when it all fails, then the followers get cute with their answers to how that could've happened.

Or, like in the case of Beth Lisick, they might write a book and hope to get their credibility back through money.

Fine. But that also makes Beth Lisick, officially, one of The Enemies of Reason:


As a new mother, I'd think Beth would care about the world she's leaving her child, rather than merely considering the short-term profit she, herself, can make by cynically exploiting other people's gullibility. And, if she thinks her kid won't later find out about what she's doing, then she's more delusional than I'd ever given her credit for when I used to listen to her tales of wandering through K-Mart, making fun of Americans in the middle, and the like. New Age waxes and wanes. The truth will still be here when this season peaks.

And it just occurs to me that, regarding what Beth Lisick actually does, I'm now thinking the same thing, today, that I thought when I first heard her read, with a jazz band, on our stage so long ago:

Just another stuck-up poseur with a little talent - but too-little appreciation for what's around her - and, come to think of it, that's one thing that's always been truly sick about the New Age.

I, for one, don't have that problem.

I'm totally happy to know the residue of the Boomer and post-Boomer generations are becoming experts on life after death, through the smarmy likes of Deepak Chopra, because, now, I can thoroughly enjoy the immense amount of satisfaction I get whenever I hear news of their sorry sage-burning asses, finally, leaving this part of the earth forever: