"While the world’s climate is on a warming trend, there is zero evidence that the rise in CO2 levels has anthropogenic origins. For daring to say this I have been treated as if I have committed intellectual blasphemy.

For reasons I find very hard to fathom, the environmental left movement has bought very heavily into the fantasy about anthropogenic global warming and the fantasy that humans can prevent or turn back the warming cycle.

This turn to climate catastrophism is tied into the decline of the left, and the decline of the left’s optimistic vision of altering the economic nature of things through a political programme. The left has bought into environmental catastrophism because it thinks that if it can persuade the world that there is indeed a catastrophe, then somehow the emergency response will lead to positive developments in terms of social and environmental justice.

This is a fantasy. In truth, environmental catastrophism will, in fact it already has, played into the hands of,...corporate interests.

Here in the West, the so-called ‘war on global warming’ is reminiscent of medieval madness.

In today’s political climate, it has become fairly dangerous,...to step up and say: ‘This is all nonsense.’ It is increasingly difficult to challenge the global warming consensus, on either a scientific or a political level,...I don’t think we should underestimate the impact that kind of informal pressure can have on people’s willingness to think thoroughly and speak openly. 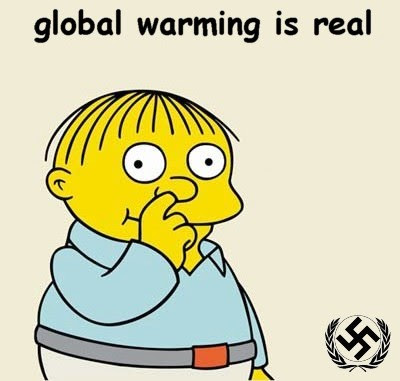 Since I started writing essays challenging the global warming consensus, and seeking to put forward critical alternative arguments, I have felt almost witch-hunted. There has been an hysterical reaction. One individual, who was once on the board of the Sierra Club, has suggested I should be criminally prosecuted. I wrote a series of articles on climate change issues for the Nation, which elicited a level of hysterical outrage and affront that I found to be astounding - and I have a fairly thick skin, having been in the business of making unpopular arguments for many, many years.

There was a shocking intensity to their self-righteous fury, as if I had transgressed a moral as well as an intellectual boundary and committed blasphemy. I sometimes think to myself, ‘Boy, I’m glad I didn’t live in the 1450s’, because I would be out in the main square with a pile of wood around my ankles. I really feel that; it is remarkable how quickly the hysterical reaction takes hold and rains down upon those who question the consensus.

This experience has given me an understanding of what it must have been like in darker periods to be accused of being a blasphemer; of the summary and unpleasant consequences that can bring. There is a witch-hunting element in climate catastrophism. That is clear in the use of the word ‘denier’ to label those who question claims about anthropogenic climate change. ‘Climate change denier’ is, of course, meant to evoke the figure of the Holocaust denier. This was contrived to demonise sceptics. The past few years show clearly how mass moral panics and intellectual panics become engendered.

-- Alexander Cockburn, giving us a taste of the wonderful future ahead - science corrupted beyond all recognition - because you don't need science when you're "saving the planet" from Spiked!