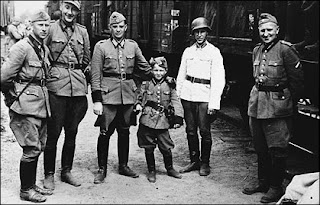 So we've got two terribly cultish stories, both involving kids, making the rounds:

First, teenagers are killing themselves at an alarming rate, in a single English village, in what people are calling an "internet suicide cult". ("But how can that be?", you ask, "There's no cults around, it's just some black guy ranting", right?) And, second, the great Orac has a report on a children's hospital, in Chicago, that claims to heal kids using "integrative medicine". Great.

I just commented on kids and the effects of spirituality on Steve Salerno's SHAMblog. Why adults don't understand that rejecting reason, for "other ways of knowing" will damage kids is beyond me. It seems fairly obvious that, if kids can see that you don't adhere to reason, they won't want to either - and, well, what's left in life then?

I know that, once I discovered the dangerous idiocy of cultism around me, I wanted to die - but, somehow, decided to fight instead. Expecting kids to do the same is probably asking too much:

This is a battle for the adults.

But what good are the adults when they, obviously, can't tell reality from bullshit? That children's hospital story is a perfect example:

Orac discovered it because James Randi, and I, were arguing with Avery Comarow (above) of U.S. News & World Reports about "alternative medicine". Now, here's a guy whose job it is to check healthcare facilities for "quality" and he's musing on, idiotically, about there being little "risk" involved in our hospitals catering to nonsense - including the one in Chicago that's openly preying on kids to make money.

It's just the blind leading the blind and at this point, if you ask me, should probably be thought of as criminal. I mean, it's one thing what idiots with money will do with to their pets, but with their kids? Come on! Parents are supposed to protect their kids from shit like this. This is fraud, by any definition of the word, or the law. Cruel as hell, too.

The problem is that, since the 60's, most Boomers have been raised to question anything but post-modern nonsense and can't see their way out of it - don't know how to live without it. So they try passing it on to the kids but today's kids (not being fully indoctrinated and, ever so slowly, becoming painfully aware of the contradictions in the adult's behavior) they can see right through it.

But then, unless they read a blog like mine, they have nowhere to turn for answers. And, believe me, they want answers. I know because I talk to 'em. But everybody else keeps sending them back to the same bullshit, over and over, like yoga and meditation is going to, somehow, make them smarter. Hell, Ben Franklin and Thomas Jefferson were smart as can be and, both, rejected this form of sloppy thinking, out-of-hand. (If religion or pagan spirituality is the answer, how did that happen?) Fuck, I could go on, and on.

But, really, who am I fooling?