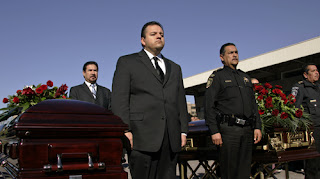 "It's as if criminals have corrupted us all,..."

Damn it, if President Bush isn't on the phone to this brave-assed man as soon as he reads his story - offering any kind of help the secretary needs - then there's something seriously wrong with the relationship between our two countries.

Secretary Ibarra has no police training, yet he's single-handedly conducting running gun battles with the drug cartels? If that's true, then, he's braver than most war time soldiers - and, just like our soldiers, he needs and deserves all the American help he can get.

President Bush, c'mon dude, get on the stick and HELP THIS MAN!!!

It would be a crazy tragedy to wake up one morning and find out this pudgy man is dead and our nation did nothing to assist him when he was alive and fighting the good fight. The crime he's fighting comes over here anyway. And fuck corrupt cops anywhere and everywhere.

Alberto Capella Ibarra has drawn a line in the sand for doing the right thing: Let's back him up, 100%.

It's what we're, all, supposed to be about.