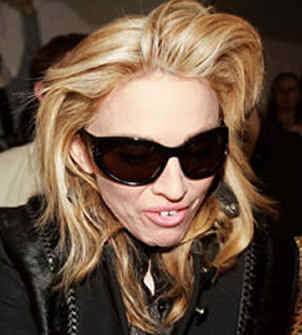 "A small group of people in the public eye promote pseudo-science without embarrassment and cannot be dissuaded from it."

-- From a new information leaflet, on the obviously cultish behavior and idiotic pronouncements of various celebrities, put out by Britain's Sense About Science, "a charity founded to increase the public's understanding of scientific issues." [Emphasis Mine]

Madonna (looking good, above) Elle MacPherson, Jamie Oliver, Chris de Burgh, Heather Mills, Stella McCartney, Joanna Lumley, Nicole Kidman, Gwyneth Paltrow, Prince Charles, the late Queen Mother, and various other members of the Royal Family, are all on the Sense About Science list of celebrities who have been told they don't know what they're talking about but still won't stop promoting what The Telegraph calls "celebrity mumbo-jumbo". (I don't know if The Oprah Winfrey Show is broadcast in England but, in America, she would be at the top of this whackjob list.)

Psychological Illusionist Derrin Browne (seen above) was saluted by SAS for his understanding of, and respect for, scientific principals. Master Magician, and anti-homeopathy campaigner, James Randi, of course, is regarded as a genius by all scientists.