You Don't Mess Around With Jim

Lots to report on the war today, starting with another "ANONYMOUS", this one making contact through Tom Kinsolving's Jonestown Apologists Alert site. "ANONYMOUS" writes (in part):

"Active cults are still the best place for psychopaths to dabble in their most evil and cruel tortures...Scientology high priest Lafayette Ronald Hubbard, who, shall we say, made more than a million clams...all behind a cloak of spiritual open-mindedness. A few apologists still singing the songs and making the bliss ninny noises thirty years after the thing was tragically shut down is just a curious side show. Not a thing of any consequence.

Some of those apologists lost daughters. Sisters. Nephews. They have paid. But they failed to learn what they ought to have learned. Now they teach about 'new religions.' They let the family members of the modern day recruits suffer the same fate that they suffered.

They've condemned others to suffer the same tragic loss. 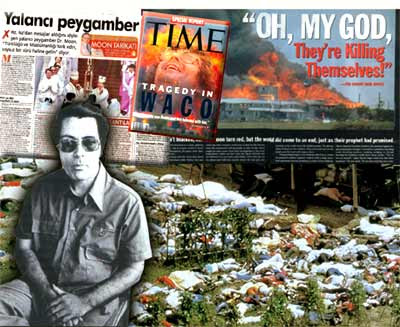 Roosting on the families of all those concerned relatives connected with all the kids in all those groups currently being tracked by Rick Ross (above) and Steve Hassan.

The People's Temple criminal enterprise, and others like it, don't just grow up out of the ground. They are crafted and carefully orchestrated."

So true. And, like Scientology's hunters, this ANON ends by echoing my own thoughts as well:

"P.S. There is a very conscious reason why I post anonymously. I never wanted a cult in my life. I didn't want it. And when it came, I did not welcome it.

So I use the Internet and I use this forum to voice opposition.

But I don't want it in my life. I consciously choose to not do the brave thing that Les Kinsolving (above) did. I chose to stay in the background - fuming. But not making myself a target. These are nasty people, and they don't play nice. And I don't need it in my life.

So I come here, and I voice my opinion, and I speak my truth, and I don't leave my name, and the guy in the next cube doesn't even know I have an opinion. And that is exactly the way I want it. And frankly, I think my right to privacy is respected in our little Republic, and protected. So I'll sign off 'Anonymous' -- again."

I hear that. He's a brave soul, either way. Not everyone's cut out for direct confrontation with mind-benders and other assorted freaks.

O.K. - on to the "SPs" working for Cruise Control. There's two new videos worth noting, the first being a clarifying message of freedom for those still in Scientology:

Next is one that's meant for FOX News, which I find to be brilliant:

"We are what you, deep down inside, wish you could be, when your wife cheats on you,..."

Owned. Oh well, we all need our motivations, I guess,....anybody else notice the examples given are all of situations where men - exclusively - have lost control of their world? (Lost a sense of The Macho Response maybe?) And this too - wow - isn't making great art easy?

So how effective has ANONYMOUS been? There's news that Scientology had to move their domain in an attempt to stop DDoS attacks - which means ANONYMOUS is doing pretty well. I mean, when a so-called all powerful organization has to protect itself, you're doing something. 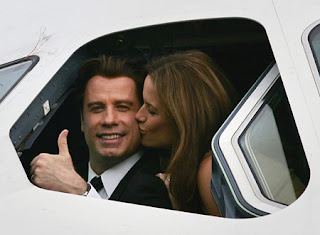 Kirstie Alley came out with her usual hoarse-voiced apologist bleating, regarding the Tom Cruise video that got all this going, (which I won't bother to repeat here, except to note how much she, like all cultists, seems to look down on the rest of humanity. How can they not? They've found the way,...) and there's a new book coming out on John Travolta (above, with his "wife", Kelly Preston) that sounds like a doozy.

Jenna Miscavige Hill's motivations seem pure enough. She's the niece of David Miscavige, the maybe-chief honcho at Scientology (There's disagreement if it's him or Tom Cruise) and she recently wrote a letter stating how the cult tore apart her - and many other people's - families.

It'll be interesting to see how the cult plays that one - or if the media will ever decide to really get in on this. (Are Will and Jada Smith (above) in or out? Entertainment Weekly - Hello!) Oh well, I've given them ample opportunity, and they seem to have missed the boat every time. I hate to admit it, because I love the news so much, but the enormity of the Cult War story makes it glaringly obvious to all with eyes to see: