James Randi, Journalists, Justice, And Me

The strikingly handsome young gentleman pictured above is James Randi. He is a great man. He runs the James Randi Educational Foundation which has been in hot pursuit of the purveyors of nonsense for many, many, years. He once said doing his job is like attempting to drain a swamp with a paper cup. And he was right:

People are (for lack of a better term) stupid, and dealing with stupid people makes it very hard for an intelligent person to do this work, that much I've learned since I've joined in his effort.

The gentleman pictured above is also James Randi. This is how he looks, today, after all his years of ghost busting and crank calling: Like Popeye with a problem.

What's his problem? He knows there are killer homeopaths, bogus reporters, politicians who indulge in magical thinking, and worthless psychics on T.V. and elsewhere. But Randi gets very little support from the mainstream media for doing away with any of them. Because I've been personally hurt by the influence of this nonsense, that fact tends to make me very angry, thus (for better or worse) The Macho Response.

The asshole pictured above is Uri Gellar. I call him an asshole because he's made his living (if you can call it that) fooling people into believing he's had the power to bend metal and read minds. He used to be famous in the United States but Johnny Carson, with the aid of James Randi, put an end to that:

James Randi has brought down lesser lights than Uri Gellar. Some have even appreciated him doing so. People like James Hydrick:

For many years, James Randi has offered $1 million dollars to anyone who can prove the paranormal is real. He has also taken on quackery, like homeopathy, which he has graciously taken the time to explain:

Unfortunately, the mainstream media hasn't had much interest in exposing the frauds that pretend such nonsense is real. The media would rather go along with the charade, putting worthless beliefs, like astrology, in our newspapers, and leaving the heavy lifting to people like Mr. Randi:

Of course, James Randi would like the mainstream media's help, but (journalism being an occupation filled with stupid people) he hasn't received much of a response. Talking about his efforts to confront what one fan called "the bad guys" (psychics, homeopaths, etc.) Randi recently wrote:

"We’ve issued strong challenges to these specific persons, in [my blog] and media articles, on TV, radio, and podcasts. They’re insulated by their handlers and their money, and of course can continue to operate because the media won’t put their noses to the grindstone."

Which is why I'm writing today: I want to talk about "the media" and how they don’t "put their noses to the grindstone" anymore - even when they have every reason to do so.

The gentleman pictured above is Phil Matier. He's known in the San Francisco Bay Area as a good investigative reporter. I saw him on T.V. last night, questioning Barak Obama about how he would fund a program for unwed mothers. Barak Obama gave Phil Matier an answer that, for Barak Obama, has become par for the course: A lot of empty phrases that add up to - you guessed it - nothing. I only saw a seconds-long clip, so I don't know if Phil Matier followed up his question by asking Barak Obama why he keeps "talking loud and saying nothing", though I've always been under the impression that's what "good" investigative reporters did.

I have met Phil Matier on a couple of occasions, and he seems like a nice guy. I'm sure he has gathered that I am extremely distressed by the influence nonsense has had on society, and my life, specifically. But, though he and his partner, Andrew Ross (pictured above) are political reporters, they haven't been concerned enough - for me or by anyone else - to expose the massive fraud of Bill Clinton's NCCAM, or any of the many cults, and cult-influenced organizations, that prey on people in the San Francisco Bay Area.

For instance, they haven't asked why our courts, routinely, send people to AA, when there's no proof AA works, but ample evidence AA is a cult. They haven't gone after health food stores, like Whole Foods, when they know they sell worthless belief-based nonsense like homeopathic preparations.

I don't know why this is (when investigative reporters have to know the sellers of these products are ripping off the public to the tune of billions of dollars) except Matier & Ross may be two "good" - but stupid - investigative reporters. Much more concerned with asking Barak Obama questions that, they know, he can give non-answers to, than dealing with anything a person like me would find substantive.

This is a picture of Phil Matier with San Francisco mayor Gavin Newsom. When Newsom was sleeping with his campaign manager's wife, Phil Matier knew about it and held the story. (He later wrote that most of City Hall was aware.) Things like that make people like me wonder what an investigative reporter's job really is these days:

Exposing the truth or hiding it?

The fresh-faced gentleman pictured above is Dan Noyes. He was ABC News's investigative reporter for San Francisco. He had a reputation with the public, for being stupid, but he was always on Gavin Newsom's case. Gavin Newsom hated Dan Noyes because, despite his reputation, Dan Noyes always did his job. Look at the tape below - can you see a difference in how Gavin Newsom regards Dan Noyes and Phil Matier? I can:

This is a picture of Debra J. Saunders:

She's the conservative columnist at the San Francisco Chronicle. She's written one column, on Global Warming, where she marveled at the cultish thinking involved but, despite my best efforts, she's steadily avoided my pleas to look more closely at any other aspect of cultish phenomena. I'm not going to guess why, in her case, because it seems apparent that the topic of cults - or, maybe, it's just me talking about cults - seems to make her uncomfortable. We've never met, so I can't be sure, but she (and her husband) have been very nice in trying to dissuade me from this crusade. Of course, it didn't work and I'm still here, fully prepared to carry on.

This is a picture of Donnell Alexander, the editor of New Angeles Monthly. He's a friend of mine. He wrote a book, called Ghetto Celebrity, where - while admitting I can be difficult - he, without prodding (and along with a nice article about my capabilities as a bandleader) vouched for my integrity as a human being. You can see the cover of his book below:

Donnell, in his new role as an editor, recently sent a reporter to interview me for a story but, unfortunately, he won't tell me what aspect of my character the article is going to be about. Granted, he doesn't have to (and I've never told anyone what to write about me) but I don't think it's going to be about my alarm over my life being derailed by killer quacks, pseudo-science passing as "alternative medicine", the negative influence of Self-Help regimes, or living with someone involved in cults and cultish-thinking. I think it's going to be about the totally unimportant news of his alarm that he's, now, friends with a newly-minted black Republican who once made a pretty good anti-war album. Yawn.

Donnell grew up in a family of Jehovah's Witnesses - but I've always been an atheist - so, I guess, it's understandable that he doesn't comprehend the trauma I've suffered from what some are calling cult affected personality disorder. What hurts is to discover that he and so many others, who've been raised to accept cultish-thinking as a normal part of life, may not really even care. Some friends. Maybe it's just hype, but it seems to me there was a time in this country when journalists knew a good story when they saw it. They seemed to be able to naturally sense when the country was in danger of veering off course. (And "We The People" knew it too.) I fear those days are over.

But that certainly doesn't mean the dangers have lessened or gone away. Things just may be worse. The journalist's awareness of what's what seems to have been dulled by an over-arching relativism that's difficult for most of them to escape or easily see their way out of.

But, when philosophy professors feel a need to write books that have to define the difference between "Bullshit" and "Truth", or write articles about "The Age of Unreason" and "How Mumbo Jumbo Conquered The World"; when scientists are making documentaries - specifically about New Agers - called "The Enemies of Reason", and declaring that whole departments of the National Institute of Health have been taken over by fruitloops; when PhD's are finding evidence of mass mental illness in New Age beliefs; when talk of cults, and cultish-thinking, are becoming common in the public square - and, especially, in political discourse - and when esteemed writers feel the need to scream that religion is poisoning everything, then, in this ocean of stupidity, there's a huge cultural story breaking that journalists are, obviously, missing or (even worse) ignoring. And this must change. 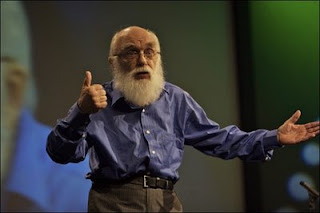 James Randi is in very good health but (bless his heart) anyone can see he's getting old,...and, being new at this work, I'm finding my arms are getting a little tired. So for once, without anger, I'd like to, again, appeal to the journalists of the world - those I know, the few I've mentioned, and all I don't know - to join with those of us fighting against what Randi calls The New Dark Age. We're feverishly working, night and day, armed with only our determination and a paper cup in each hand. Please, you must help us: