I Am So Pissed (You People Are So Dumb) 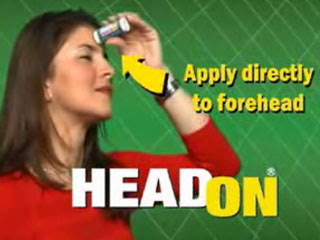 - Steve Salerno, writing about HeadOn! on the SHAMblog

$48 million dollars - for a "homeopathic" stick of wax. And they got all that money in less than a year. At $8.00 apiece: That's a whole gang of idiots out there.

And it probably never occurs to them, that they've given their money to people who are laughing at them, does it? No, they're too stupid for that. Or the fact they've given their money to unscrupulous people - possibly criminals - and for what? A stick of wax. Not the hungry, the sick, or the poor (or even to donate to this site where it's needed) but for people who laugh at them for how pathetically stupid they can be.

Is it any wonder why I could less about this totally unrealistic, and stupidly hubristic, desire to "Save The Planet"?

Fuck the planet. You don't know shit about it. Focus on saving yourselves,...