Hey, Somebody Wrote A Book About My Home!!! (Including Foster Care And Just Everything!!!) 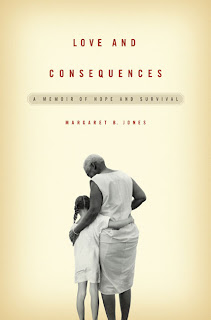 In the South-Central neighborhood of Los Angeles, where Margaret B. Jones grew up in the 1980s, gangs recruited “with the same intensity as the N.F.L. did,” she says, and shootouts and hits were so ubiquitous that “the odds were stacked against a male child living to see 25.” Peddlers went door to door selling life insurance policies, reminding parents of these deadly stats, and even teenage girls and elderly church ladies carried pistols to protect themselves. As the crack epidemic metastasized, and turf wars escalated, the ’hood became a combat zone, with police raids and deadly face-offs between Bloods and Crips becoming routine parts of daily life.

A dealer the young Ms. Jones made deliveries for lays out the unforgiving rules of the street:

¶ “Trust no one. Even your own momma will sell you out for the right price or if she gets scared enough.”

¶ “War has no room for diplomacy, war is outright vicious. Never expect mercy and never show it.”

¶ “There is no greater sin in war than ignorance. Never speak or act on anything you aren’t 100 percent sure of, or someone will expose your mistake and take you down for it.”

This violent world has been memorably depicted before in Sanyika Shakur’s “Monster: The Autobiography of an L.A. Gang Member” (1993) and Leon Bing’s “Do or Die” (1991). What sets Ms. Jones’s humane and deeply affecting memoir apart is not just that it’s told from the point of view of a young girl coming of age in this world, but also that it focuses on the bonds of love and loyalty that can bind relatives and gang members together, and the craving after safety and escape that haunts so many lives in the ’hood.

Although some of the scenes she has recreated from her youth (which are told in colorful, streetwise argot) can feel self-consciously novelistic at times, Ms. Jones has done an amazing job of conjuring up her old neighborhood. She captures both the brutal realities of a place where children learn to sleep on the floor to avoid the random bullets that might come smashing through the windows and walls at night, and the succor offered by family and friends. She conveys the extraordinary stoicism of women like Big Mom, her foster mother, who raised four grandchildren while working a day job and a night job. And she draws indelible portraits of these four kids who became her siblings: two young girls she would help raise, and two older boys, whom she emulated and followed into the Bloods.

Ms. Jones — or Bree, as she was known to family and friends — was abused as a child, put in foster care, and after three years of carrying a trash bag filled with her possessions from one temporary home to another, ended up, at 8 ½, in Big Mom’s home in South-Central — a part white, part Native American girl who looked utterly out of place in this nearly all-black world.

Bree had been told she had attention deficit disorder, reactive attachment disorder, post-traumatic stress disorder and labeled “S.E.D. (severely emotionally disabled).” By age 8 she had “decided not to hurt anymore” and mastered the art of detachment: “I was shocked that I hadn’t thought of it before. I would watch my life from the outside rather than feel it from within. If I couldn’t feel it, it couldn’t hurt me.”

Though her foster family’s love would help heal Bree’s heart, the numbness always threatened to return, and she observes that this sort of emotional hibernation was rampant in South-Central. When Bree went to visit her foster brother Taye in prison — he’d been sentenced for selling drugs — he told her he loved her but didn’t want her to come back for any more visits: waiting for visits and letters, he said, “was killin me,” and he’d decided he wasn’t going to “even find out what was up wit y’all.” He had to do his “time solo” or he “ain gonna make it.”

Ms. Jones’s portraits of her family and friends are so sympathetic and unsentimental, so raw and tender and tough-minded that it’s clear to the reader that whatever detachment she learned as a child did not impair her capacity for caring. Instead it heightened her powers of observation, enabling her to write with a novelist’s eye for the psychological detail and an anthropologist’s eye for social rituals and routines.

She tells us how her brother Terrell became an “official” Blood, getting “jumped into” the gang by surviving a savage initiation beating. (“So five grown men beat 13-year-old Terrell for two minutes in the street.”) She tells us about getting a .38 for her 13th birthday and learning how to cook up a batch of crack to pay her family’s overdue water bill. She tells us about survival tips for visiting the local park. (“You must always scan the park, figure out who is where and the best escape route from each direction.”) And she tells us about the iconography of the tattooed tear many prisoners and ex-prisoners wear on one cheek. (It “can mean a few things, but usually it’s that the wearer killed someone in prison or lost a loved one while in prison.”)

Ms. Jones’s own story is strewn with loss and death and grief. She saw a gang elder named Kraziak, who’d patiently taught her about the history of L.A., gunned down by rival Crips. She saw her next-door neighbor Big Rodney, who used to give her books to read, grabbed by the police in a violent raid.

Both her older brothers, Terrell and Taye, were sent to prison, and after his release, Terrell, who’d talked of getting a straight job so his children wouldn’t grow up in the ’hood, was shot to death by Crips as he sat outside Big Mom’s house, waiting to meet his son for his weekend visit. Ms. Jones’s friend Marcus, a brother figure with whom she used to drive around Los Angeles, dreaming of what life might be like “beyond the lights” of the city, was shot and killed, she says, and her boyfriend, Slikk, was arrested for an attempted murder he didn’t commit.

Although one of Bree’s teachers urges her to apply to college, the idea initially seems “almost unimaginable” — “so beyond my reach that I couldn’t really picture myself doing it.” Finally, however, she does apply and eventually graduates from the University of Oregon with a degree in ethnic studies. She finds love with, of all men, a Crip who “changed every detail of my life” and who taught her that “we are not each other’s enemies,” we “were just born into different streets and neighborhoods.”

“Unlike most of my homies,” she writes, “I made it out of L.A. with my life and without a prison record. Wait, let me reword that, as it is not entirely true as it stands. I made it out of L.A. with what life I had left. I wake up in the morning, and where I live, in a little house on a dead-end street in a small Oregon town, I hear birds singing in a big-leaf maple outside my bedroom window, and I thank God because I know it shouldn’t have been so.”

There are “some parts of me that did die in L.A.,” she adds, “and that I’ll never get back, and other parts of me that die daily because I exist away from the city, in a world where people can’t begin to imagine what it was like where I grew up.”

One of her friends in prison writes her that “so few of us will ever get the chance to see what it’s like outside L.A.,” that she should “be our eyes.” That Ms. Jones has done, and with this remarkable book she has also borne witness to the life in the ’hood that she escaped, conveying not just the terrible violence and hatred of that world, but also the love and friendship that sustained her on those mean streets.

By Michiko Katutani, writing for the New York Times