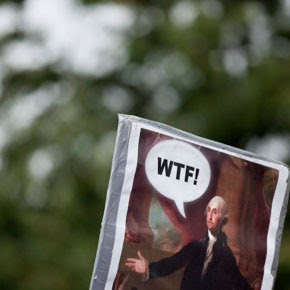 If there's a word that seems to be universally hated it's "cult". People don't want to admit there are cults, or they've been associated with cults, or that they've ever accepted the teachings of cults. Call someone a "cultist" and, man, you've got a fight on your hands. Someone told me it was the same as calling someone a "nigger" - which is bullshit - or an "idiot" - which is bullshit too:

The word cultist just describes anyone who's fallen under the spell of some stupid person's (or group's) ideology enough to start living by it, and/or repeating it's phrases, and even smart people are capable of doing that. Cults are a threat to our freedom, both, as individuals and a country.

"Fool" is a better way to think of a cultist, because, like "a girl in trouble", with a little hard work, foolishness can be reduced to a temporary condition.

Unfortunately - once it becomes clear how much influence cults have had on society - it's kind of hard not to throw the word around (as any regular reader of this blog can see.). Now that Sexy Sadie is gone, just think of all the people he's led down "the path to enlightenment". Entire American towns, and villages all over the world, have dedicated themselves to doing what that fraud (who used to claim he would never die) encouraged them to, when it's apparent, to anyone with eyes to "see", there was always a ruthless, fascist, means-to-an-end type of ideology behind all the giggling and lying: Oh, yea, it's hard as hell to challenge someone who takes advantage of others once they've convinced themselves they're doing it to "Save The Planet". The fact that the people they've hurt are part of "The Planet" is easily put out of their minds.

John Lennon ("The Smart Beatle") described Sadie's teachings best - and all other cultish NewAge belief for that matter - with the words, 'Look, forget it! Be happy!' Fucking idiot.", but that hasn't stopped Boomers from believing them anyway, saturating our culture for far too long. From presidential candidates, to TV personalities, songwriters, on down to the lowliest of souls, 'Look, forget it! Be happy!' has been twisted, by way of language manipulation (or as my foster mother used to say, making sure "the devil talks pretty") into the idiotic refrain that everyone should merely "move on" from whatever has occured before, no matter how devastating, no matter who got hurt.

But not everyone is capable of being indoctrinated into the "you create your own reality" way of thinking, since it's bullshit, so not everyone can "move on" from, for instance, tragic loss or whatever else has come before. Nor should they have to. "Moving on" is possible only when apologies are made and, then, forgiveness can be achieved to heal the breech. Sadie's death, for James Randi, reminds him of the awful death of magician (and Transcendental Meditation follower) Doug Henning, above, and though many people, worldwide, are mourning Sadie's demise, I doubt Randi is one of them. Hell, I know I'm not.

It'll be a long time before we're, all, able to put this ugly period of mental manipulation behind us. As a matter of fact, it's going to be a struggle, because too many willing "believers" are still with us, and will be, for many moons to come. My only hope is that I've started my own work in time. There's still lots and lots more that needs to be done.