The Pride Of The Party 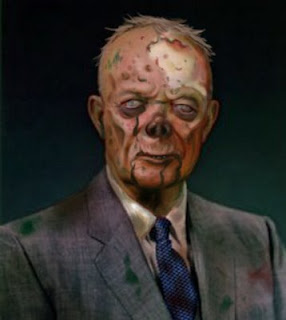 "Bill Clinton likes to tell anyone who’ll listen that he governed as an 'Eisenhower Republican,' which is kind of true — NAFTA, welfare reform, etc. If you have to have a Democrat in the Oval Office, he was as good as it gets for Republicans — if you don’t mind the fact that he’s a draft-dodging non-inhaling sex fiend. Republicans did mind, of course, which is why Dems rallied round out of boomer culture-war solidarity. But, if he hadn’t been dropping his pants and appealing to so many of their social pathologies, his party wouldn’t have been half so enthusiastic for another chorus of 'I Like Ike.'”

- Mark Steyn, of the National Review Online, showing how the Democrat's childish knee-jerk sense of rebellion drove them to validate ideas they didn't agree with.

And, I'll add, this failing is reflected in (almost) everything the Democrats do,...
Posted by The Crack Emcee at 6:36 AM