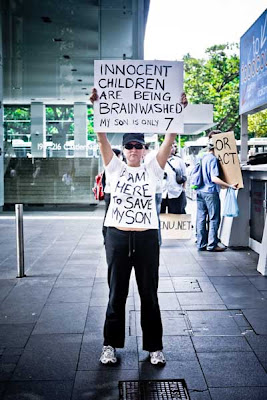 I just read a horrible, unfavorable and un-researched article from some Boston blogger/reporter, pretty much calling [Anonymous] jerks for protesting a religion, and not having anything better to do.

I’m offended by that — really, truly, deeply offended by his ignorance. I have not undertaken this lightly or impetuously. Maybe there are some who are in it because it’s a popular thing to do, or for the “lulz,” or who don’t understand or believe what these people can and will do to fight any and all critics. I don’t know. Our group seemed incredibly well-informed, disciplined, passionate, cautious and even empathetic toward Scientologists as individuals. You know how I got into this, because you were there kind of at the beginning for me. I thought Scientology was just a harmless but avant garde philosophy, or something, and knew nothing. The Tom Cruise video didn’t give me giggles. It scared me because he is obviously disturbed; someone has done something very wrong to him, and I wanted to know what.

Hundreds of Google searches, followed links, documents read, anonymous e-mail registries made, and comments posted… and here I am. I’m 39 years old, a Midwestern mom of [removed to protect identity], in a very happy marriage with a wonderful man – and I feel as if I’ve fallen into an alternate universe. I had no idea such evil really existed, at least in the United States . I can’t believe they’re allowed to operate here, and so easily subvert the justice system to their advantage, bullying and terrorizing people who merely present balanced articles. As a former reporter, that strikes a very personal fear and fury into my heart. I have agonized, literally cried and shaken with fear, at the thought of deliberately walking into the line of fire with a family at stake. My husband and I have had arguments about why it’s so important that I spend 10 hours a day reading literature on the subject. As a reporter, it was THAT important for me to consider all sides, be fair, include all available information, and there has been a flood recently, including the videos of Miscavige speaking about 2006 accomplishments. My leisure time, personal hygiene, and work/family duties have all taken a big hit for about a month now. I was jumping at shadows, (going “tinfoil”), even ripping open an unexpected package. I received financial information mailed to my home address for a new credit card account in someone else’s name, and of course called the company to inform them of the mistake, destroying the cards/PIN numbers.

It has been very scary, difficult, and stressful. I almost wish I could go back to a time when I knew nothing, because it was easy to know nothing, and fear nothing.

All my friends are mystified by my passion about this, and the lack of support combined with fear to dissuade me. My husband had no interest in any of it, saying I was lending credibility to Scientology by opposing it, and was giving in to “compulsion.”

“They’re whackjobs, and most people are NOT going to even go there.” He said, “You’ve lost your sense of proportion.”

I said, “And you, I’m sad to say, are one of many who will sit on their asses until danger is 10 feet from your front stoop. That’s how these things go so far – underestimating them and not being informed.”