Do Not Doubt Me: The Cult Of Obama

"...Nobody joins a cult. You join a self-help group, a religious movement, a political organization.

They change so gradually, by the time you realize you're entrapped - and almost everybody does - you can't figure a safe way back out...."

Great. Very clear, right? Easy to understand? That's how it happens. Watch out for it. No problem. O.K.

And now read today's piece, below, by Jake Tapper of ABC News: 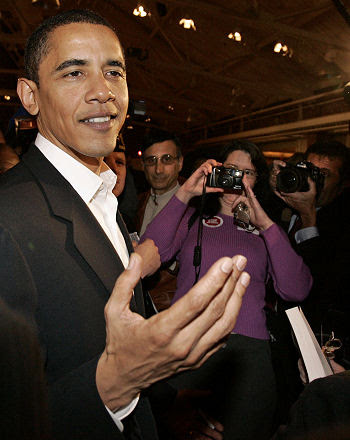 "Inspiration is nice. But some folks seem to be getting out of hand.

It's as if Tom Daschle descended from on high saying, "Be not afraid; for behold I bring you good tidings of great joy which shall be to all the people: for there is born to you this day in the city of Chicago a Savior, who is Barack the Democrat."

Obama supporter Kathleen Geier writes that she's "getting increasingly weirded out by some of Obama's supporters. On listservs I'm on, some people who should know better – hard-bitten, not-so-young cynics, even – are gushing about Barack…

Describing various encounters with Obama supporters, she writes, "Excuse me, but this sounds more like a cult than a political campaign. The language used here is the language of evangelical Christianity – the Obama volunteers speak of 'coming to Obama' in the same way born-again Christians talk about 'coming to Jesus.'...So I say, we should all get a grip, stop all this unseemly mooning over Barack, see him and the political landscape he is a part of in a cooler, clearer, and more realistic light, and get to work."

Joe Klein, writing at Time, notes "something just a wee bit creepy about the mass messianism" he sees in Obama's Super Tuesday speech.

Says Klein: "That is not just maddeningly vague but also disingenuous: the campaign is entirely about Obama and his ability to inspire. Rather than focusing on any specific issue or cause — other than an amorphous desire for change — the message is becoming dangerously self-referential. The Obama campaign all too often is about how wonderful the Obama campaign is. “

The always interesting James Wolcott writes that "(p)erhaps it's my atheism at work but I found myself increasingly wary of and resistant to the salvational fervor of the Obama campaign, the idealistic zeal divorced from any particular policy or cause and chariot-driven by pure euphoria. I can picture President Hillary in the White House dealing with a recalcitrant Republican faction; I can't picture President Obama in the same role because his summons to history and call to hope seems to transcend legislative maneuvers and horse-trading; his charisma is on a more ethereal plane, and I don't look to politics for transcendence and self-certification."

Then there's MSNBC's Chris Matthews who tells Felix Gillette in the New York Observer, “I’ve been following politics since I was about 5. I’ve never seen anything like this. This is bigger than Kennedy. [Obama] comes along, and he seems to have the answers. This is the New Testament."

And behold, Obama met them and greeted them. And they came up and took hold of His feet and worshiped Him.

The Holy Season of Lent is upon us. Can Obama worshippers try to give up their Helter-Skelter cult-ish qualities for a few weeks?

At least until Easter, or the Pennsylvania primary, whichever comes first...

UPDATE: Let me be clear: I'm not saying there shouldn't be enthusiasm in politics. I'm merely touching on the fact that some Obama supporters' exhuberance seems to be getting a little out of hand. Obama himself joked about this at a Hollywood fundraiser, as noted in Men's Vogue:

“When Morgan Freeman comes over to greet Obama, the senator begins bowing down both hands in worship. ‘This guy was president before I was,’ says Obama, referring to Freeman's turn in Deep Impact and, clearly, getting a little ahead of his own bio. Next, a nod to Bruce Almighty: ‘This guy was God before I was.’”

"Helter-Skelter cult-ish qualities"? "Getting a little out of hand"? Sure. TMR features a raving idiot and everybody else knows better than TMR. Right. So this raving idiot has a question for you in light of all this:

What other cultishly vapid talker out there is helping Obama build this cult?