What Color Is The Code For Shut Up? 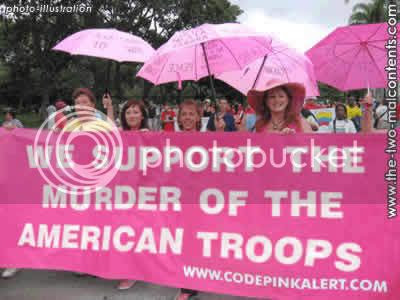 “They are finding out that the rest of America doesn’t go along with their kooky politics.”

"Our troops are here for our protection. If there was any earthquake, these people in Berkeley would be the first ones crying, begging for their help. For someone to try a stunt such as this -- no, not on our watch."

"The e-mails are running 15 to 1 in favor of the Marines,...They've run the gamut from being very thoughtful to dismissing Berkeley citizens as liberal scum."

“[They're saying] the Marines can't recruit here, they should recruit somewhere else, and if there's a problem, we still want you to help us. It's astounding.”

- Country Joe McDonald, a Navy veteran and Vietnam-era peace activist, who sang his "I Feel Like I'm Fixin' to Die Rag" at Woodstock in 1969. (He also vouched for my album - CMC)

“It's an indication that the '60s are not completely dead in Berkeley,...The issue,...has become Berkeley itself, and I don't think that's what [anyone] had in mind.”

- Charles Wollenberg, chair of social sciences at Berkeley City College and author of "Berkeley: A City in History."
Posted by The Crack Emcee at 10:34 PM