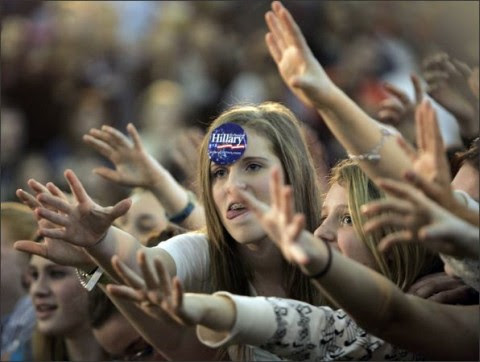 Ah, now they're getting it:

Ladies and Gentlemen, I beg of you to look at the photo above and think long and hard about what is happening to people's minds within the Democratic Party. This is not normal. This is not healthy. As someone with a lifetime of interest in the political process, I can assure you, this is NOT "politics as usual". These people are zombies. What you see in that picture is, clearly, the influence of cultish thinking - initiated by those behind this latest campaign. (It was provided, as an example of just that, on The Huffington Post, so don't act like I'm making this up.)

Anyone who reads this blog knows I have set out to prove, over and over again, that Hillary Clinton is a cultist. That she, and Bill Clinton, have been building a network of believers for some time - while hanging out with psychics, and other con men, like Ken Wilber and Tony Robbins.

I've told you that Barack Obama has been doing the same thing - and, now, people are starting to notice he's the only man running who can talk for an hour and say nothing. But, more importantly, his listeners don't ask anything more of him. (In a "political campaign". For the President of the United States. Strange, isn't it?) One Australian reporter has said, "I hear that too in the voices of Obama's staff constantly, themselves referring to this 'cult of Obama'." Obama's own staff. Convinced yet?

Obama's been working the meditation crowds, starting in Iowa, and letting that "spiritual" con woman, Oprah Winfrey, be a part of his campaign. And - here's a cultish thinking tip-off for you - few question anything Oprah says or does, like her endorsement of The Secret, or her recent backing of that troll-like schizophrenic author, Eckhart Tolle. Think about it: A grown woman, who fancies herself a journalist, continually falling madly in love with (and becoming determined to spread) ideas that any 5 year-old could see is bogus - and it's working so well people think of her as a moral leader - that is NOT normal, folks.

I have mentioned how the San Francisco Bay Area - a Democratic stronghold - is beset on all sides by cultism, not allowing any thought, but that dictated by cults, to be allowed. I have told you about sex cults, spiritual cults, the honoring of cults by political figures, and even murders committed by cults - all happening in broad daylight (including the murder) but, so far, the San Francisco Chronicle has run only one editorial that cults are as big a problem as I've said. It ended with these words:

"What have we learned to avoid a repeat?...There's a clear answer. Absolutely nothing."

You'd think, after Jim Jones killed 900 Bay Area residents, they'd be a bit more circumspect about this kind of stuff, but no. Now, all the local papers advertise this crap, even selling the idea of water as medicine in the Style and Living sections. They hire writers who are into it, too. How soon we forget just what kind of thinking got all those people killed.

Oh sure, we see cultism - and acknowledge it as such - when media stars, like Madonna or Tom Cruise - are doing it but, for some reason, there's a refusal to come to grips with political cults. (Lyndon Larouche, anyone?) Why? Because then they're the rubes. Not just the people, or the politicians, but the journalists too. After trying to talk to members of my local media, I have to say, that's the only way I can explain their reluctance to deal with this issue: They've become so open-minded their brains fell out.

Look at that picture again, Ladies and Gentlemen, and really "look" at it hard. Then, look at the links, and around this site, objectively, while putting the pieces together, and, I think, you can only reach one conclusion:

We have a very serious problem on our hands.