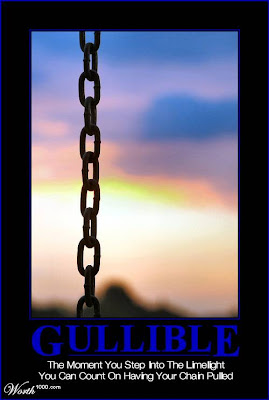 "John really picked up the doozy of a floozy when he met Rielle Hunter, formerly Lisa Druck, and yes, I can guess why she changed her name, can’t you? Rielle, who is 42, likes to tell gullible guys she has had “many lives.” In one that she definitely did live, she was a girlfriend of novelist Jay McInerney. He based a character in his novel The Story of My Life on her because, he told the New York Post, her behavior “intrigued and appalled me.” The character is described as “cocaine-addled” and “sexually voracious.” Not exactly the perfect characteristics for the discreet mistress of a man running for president who wants to lecture the country on moral issues.

Jonathan Darman of Newsweek also got to know Rielle, when she was chasing and being chased by Edwards. On the campaign trail, she told Darman she was an actress and a spiritual adviser, devoted to astrology, and thought Edwards had the “power to change the world.” Uh-huh. She also confided to Darman that Elizabeth Edwards, the smart, gracious, cancer- stricken wife, did not have “good energy.” And after Elizabeth, who is obviously also smart, got Rielle fired from her “who-are-you-kidding” job filming Webisodes of John, she hissed to Darman, “Someday the truth about her is going to come out.” By the way, Darman, Newsweek’s senior writer and political correspondent, confesses that he “liked” Rielle and let her do his astrological chart. Gee, what sign are you, Jonathan? Can I guess?"

-- Myrna Blyth , looking at NewAge and "blythely" doing what everyone should be, on the National Review Online.