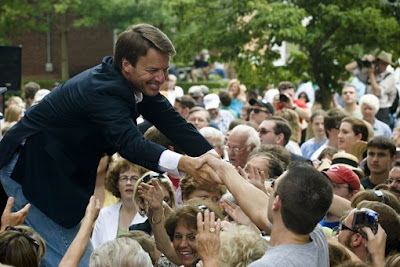 Edwards and Hunter initially met each other sometime during the winter of 2006 (either late December 2005 or early January) in a hotel restaurant in midtown Manhattan. It would be another seven months before Edwards would first pay her for the documentary work. As Woodruff rightfully noted, the initial check cut to Hunter's film company was written on July 5, 2006, for the cost of $12,500.

What happened in between that winter meeting and the start of filming? Emails sent by Hunter suggest that her romance with Edwards was in full bloom that spring. In early April, Hunter wrote about a trip she had taken to North Carolina to see the man whom she affectionately referred to as "my love lips."

A week later she wrote another email in which she described the mental anguish of "being in love with a (still somewhat dysfunctional) married man."

Indeed, the circumstances surrounding Hunter's professional life resoundingly suggest that Edwards hired her as a front to continue their relationship. For starters, she had virtually no film experience prior to being asked by the former Senator to make documentaries. Moreover, Hunter's film company, Midline Groove Productions, was started in the spring of 2006 - months after she and Edwards first met -- suggesting that it was created for the sole purpose of working with him.

As Colin Weil, a film consultant on the project told the Huffington Post back in October 2007: "Neither of them [Hunter and her business partner and friend Mimi Hockman] had done tons and tons of stuff before hand..."

In the context of admitting to an affair, it may seem innocent for Edwards to have misled ABC about the staring point. But the precise date is important. Over the course of nine months Edwards would spend more than $114,000 of the One America Committee's budget on Hunter's films. Whether he did that in an effort to have Hunter around or as a legitimate documentary project would likely make a difference to those who thought they were contributing to a poverty-eradication effort.

-- Sam Stein, finding there are "two Americas" after all, while writing for The Huffington Post

Isn't it great that NewAge Rielle is so into "seeking the truth"? Or, as most NewAgers do, did she think that ability was merely limited to the enlightened?