O.K., This Is Outta Be Good: Biden Is In 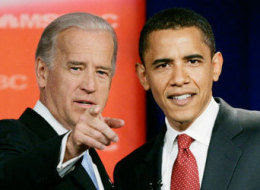 Biden, 65, is a veteran of more than three decades in the Senate, and one of his party's leading experts on foreign policy, an area in which polls indicate Obama needs help in his race against Republican rival John McCain."

Not only that, but Barack gets the daddy he never had.

Biben's cool - but gaffe-prone - so that makes two of 'em now. Still, he should be able to whip the kid into better shape. Unfortunately, they're both of the mind to consider any mention of "whipping" as racist, so there's still lots of room for major stupidity from this ticket.