NewAge: Not The Kind Of Integrity We Have 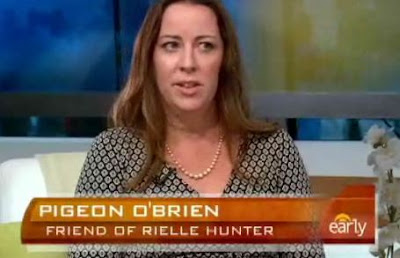 Unfortunately, you have to go here to hear Pigeon O'Brian's logic for yourself:

Rielle Hunter has "tremendous integrity," but not John Edwards, because Pigeon can't pass judgment on a NewAger who sleeps with a married man - just on the married man the NewAger slept with.

Got that? A NewAger who didn't have the ability to say "no" to a married man; a NewAger who disses the married man's cancer-stricken wife (who she had to know was suffering from cancer for a second time) - the NewAger who actually thinks it's a NewAger's job to sleep with married people because it's the NewAgers who can "help" the married people - and then refuses to reveal the truth of the baby's heritage (though, like all NewAgers, she's claimed to be consumed by a need seek the truth and have it be revealed) still, somehow, she has character. Incredible.

Can't you hear Oprah telling her followers to "make your own truth"? Well, this is exactly what Oprah means. How do you like the way it plays out in the real world?

Like all NewAgers, Pigeon O'Brian doesn't care what "integrity" means (neither do Rielle or Oprah) because NewAgers redefine everything to mean "whatever NewAgers want to do - and to Hell with the fall-out - which will include someone getting burned." Considering everyone who contributed to Edwards's campaign(s), the people John and Rielle burned now number in the millions.

These words mean nothing to NewAgers, a group that merely includes Rielle. Those words are completely divorced from NewAgers and, like The Dark Knight's Joker, NewAgers will happily drag everyone down with them to make the point. But there's another point that's made here too - an obvious one:

If you're not willing to "pass judgment" on what these narcissists do (because they give lip-service to being "nice") then you're more-than-willing to be their chumps.