Birds Of A Feather (Flock Together) Part II 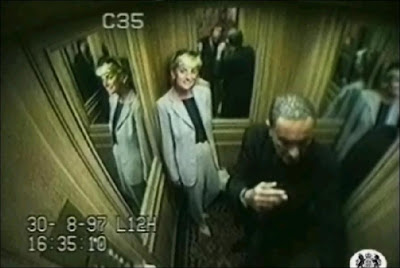 "You know who used to get a big kick out of Rielle? Princess Diana. Well, Di enjoyed the exploits of Alison Poole, the main character in Jay McInerney’s novel Story of My Life, who was based on Rielle."

-- Simon Scowl, in his latest hunting for info on the Hunter, for Deceiver.com

I believe it. As the photo shows (above) Princess Diana was quite the "party girl" behind the scenes, callously chasing numerous rich boyfriends (that she played against each other) while holding the same "peace and love" NewAge beliefs as Rielle; Diana had a circle of "nasty" believer friends, and, of course, numerous trashy affairs while married. In other words, Princess Diana was as big of a loopy, socially-destructive, hypocrite as Rielle - and it was what they "believed" that made them that way.

She and John Edwards's mistress would've made the perfect running buddies.