Rielle Hunter And Quotes From The NewAge 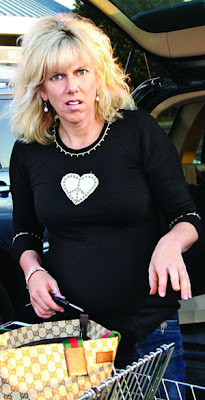 "I am going to be famous," Rielle said. "Rich and famous. I am going to meet a rich, powerful man." I was by now leaning against the kitchen cabinetry, and the fact that it was holding me up made me almost certain that Harrison Ford's virility had gone into its construction.

"Wow," I said. "How are you going to do that?" Rielle slid a toe out from under the tip of her flared yoga pants and poked me with it, playfully.

"I'm going to manifest it," she said.

I couldn't play along anymore.

"Good luck," I said. "I just ... I don't really believe in stuff like that." She backed away from me now, a conspiratorial smile on her face.

"You don't have to," she said. "I'm just going to keep using your amazing energy, and you'll see."

-- Sarah Miller, a contributor to the book, Bitch In The House, in The Gazette

"She is one of millions of other girls, not smart enough to make it as a writer, not pretty enough to model or act.

"She was average in every way, except for her drugs and whacked-out sense of truth."

-- A friend of Rielle Hunter's, painting an accurate picture of Hunter as the average NewAger, for New York's Daily News

"At this point, he doesn't want to comment, because he's thinking it's her affair. This is Rielle's problem."

-- Kelly McGovern, daughter of Hunter's friend, Bob McGovern (who set up the last Edwards trist) showing the loyalty NewAgers give to those they claim to love, in the New York Daily News

"As painful as it will be for him, he needs to come clean. There's an overwhelming view that he's still lying."

-- A former colleague of John Edwards, voicing the dominant feeling around the scandal, for New York's Daily News

"[Elizabeth Edwards] has no part to play at this year's Democratic National Convention. Edwards has not been buoyed by the sympathy one might expect for a woman scorned by a cheating husband."

"I never figured you for a comforter, John. Sure, I heard your spill about the two Americas and your fight against poverty, but you were so bright and shiny that I could not make the words align with the speaker. You proved me wrong. You are a comforter. In your own way, albeit an affair, you lightened my days, reminded me of simpler times when I was less aware and much more naive. Thank you, John. For a second or two, I forgot to think like an informed adult."

-- Rebecca Powell, acknowledging her world being up-ended, for New West.