Your Only Choice, Rielle: Make The Best Of It 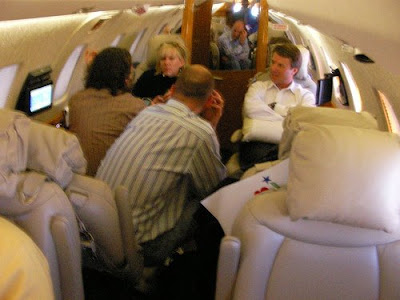 "If those who know Rielle Hunter have no question that the Enquirer’s reporting is accurate, they nonetheless have questions. How much did Elizabeth Edwards know about her husband’s machinations to keep his affair secret? Indeed, some suspect the candidate’s cancer-stricken spouse may have been heavily involved in orchestrating the cover-up. And why was Young apparently willing to sacrifice his own reputation to maintain the reputation of a fool like Edwards?

It is unlikely that these questions will remain unanswered for long. What the Edwardses must fear now is that Rielle Hunter will wise up and recognize that she is a woman done wrong, who has more to gain from honesty (and the legal system) than from continuing to participate in a politically-motivated charade on behalf of a man who has no political future. Once she sues Edwards for child support — and sells Hollywood the film rights to her story — the facts will tumble down like an avalanche in an L.A. earthquake.

The astounding thing is that Edwards, a brilliant lawyer, knew the legal jeopardy involved in his affair from the moment it began. And the frightening thing is how close he came to achieving the pinnacle of power. Four years ago, this man came within 18 Electoral College votes of being vice president. In September 2007 — before the Enquirer’s first story about Rielle Hunter — an L.A. Times poll showed Edwards in second place in both Iowa and New Hampshire.

In conversations with Newsweek’s Darman, Hunter spoke in New Age jargon of her spiritual affinity for Edwards, and perhaps this hit closer to the truth than even she realized. They’re both wannabes, destined to become has-beens."

-- Robert Stacy McCain, popping his fingers by waving his hands, on Pajamas Media