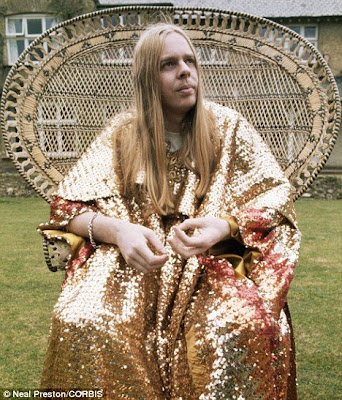 "I was unique in the band as a card-carrying Conservative. They were all teetotal, while I could drink for England. And they were all vegetarians - I was an unashamed carnivore.

I have no objection to vegetarians (though I don't understand why, if you don't eat meat, you make tofu look like sausages or burgers) but some of the band were extreme with their vegetarianism.

For a couple of them, having a meal consisting entirely of vegetables was not enough - they had to know the farming methods used in their production, the name of the guy who planted them and, ideally, the species and health of the birds whose droppings had enriched the organic soil.

Well, that might be possible these days in a wholefood specialist shop, but in a Holiday Inn coffee shop in the American Deep South in the early Seventies? Some of the band were going without food for days and it was becoming impossible. So we decided to take a chef on the road.

I pointed out that I did not want to spend every night of the tour munching on a single lettuce leaf washed on the banks of the Nile by spiritually enlightened shamans. The band agreed that the chef could cook separate meat-crammed meals for me.

On the first Saturday, he said: 'Rick, do you fancy a nice roast tomorrow?' 'Bloody hell, do I fancy a roast? Absolutely,' I replied.

We played the Sunday show and, back at the hotel, all sat down to eat. The chef brought out the rest of the band's food first: some chives, a carrot or two and some celery sticks. They all tucked in, saying, rather unconvincingly, that the meal was delicious.

Then the chef returned with an enormous silver platter on which sat a magnificent golden-brown 22lb turkey, sausages wrapped in bacon, potatoes and parsnips.

The veggies around the table stopped eating, their forks suspended in mid-air. The chef put the roast in front of me and started serving it up - the aroma was incredible.

Then someone said: 'Er, could I try some roasted potatoes or parsnips, please?'

I piled my plate high and got stuck in. With the exception of guitarist Steve, who was the most committed of the veggies, everyone watched my every mouthful. After they had finished their meals, a mass exodus ensued, clearly to avoid being around this delightful roast for too long.

A few minutes later, the door opened. It was Alan, our drummer. 'All right, Rick. I was thinking, I know I'm veggie and all that but to be honest I do eat the occasional piece of white meat. Any chance I could try some of the turkey?'

'Of course, help yourself,' I said. 'Thanks, but I'll take it back to my room, if that's OK.' He hastily put some of the turkey and trimmings on a plate and scurried off.

Five minutes later, Jon walked in. 'Rick. I was thinking, I do have the odd bit of chicken now and then, so I was wondering...'

He was followed by Chris. 'Be my guest,' I pre-empted.

I turned to the chef who was grinning widely. 'Probably best if you don't mention this, my friend...'"

-- Rick Wakeman, keyboardist for the band Yes, commenting on his band mates - and the typical hypocrisy of liberals - in the Daily Mail.