Michelle Obama: Drama For Your Mama 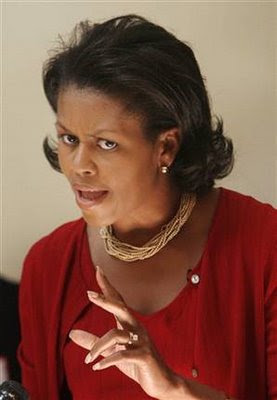 * To: Michelle Obama,
* Wife to the Democratic Presidential Candidate Barack Obama, US Senator

I have decided to write this open letter and to refer you to our telephone conversation the day your husband was having a debate with his opponent in New York. This has to be an open letter because the story is already out there and many Americans are crying for the truth about what we discussed.

I know our discussion was not meant to harm your husband’s candidacy nor was it meant to derail the US Presidential elections in any way. We both know that our talk was - a sister to brother talk - black to black person talk - in the African perspective. The problem came later when we listened to the taped recording of our talk. API thought it wise to publish some of the contents that are not inflammatory. API did the best to select that which could not cause any chaos and we in API did not expect that waht we chose to publish would have the impact it now has had in the last five days.

Many Americans have surprised us in the way they take the interview very seriously. We want to respect them - as we have promised from day one - to let them know the truth in what transpired between yourself and us. We have realised that the American people want to know you well before you probably become their first Lady.

The intention of writing to you this open letter is to appeal to you to confirm that we had a talk because it is the only right thing to do now, so that we avoid any embarrassment should the whole tape be aired unedited. You are well aware of our discussions touching on thorny issues like Iran’s good trade relationship with Kenya and the fact Kenya may play a role in mending the relationship between Iran and the US so that healthy trade relationship may be achieved if your husband gets the presidency. Remember the length and the depth of our talk on other issues of importance in this hotly contested election where as you have stated - is an opportunity for the black people to start being proud of America and to be patriotic.

API was disappointed that one of your husband’s spokespersons rushed to the press to deny that you had called API. It is best that they check with you first before jumping to conclusions as if they control your private calls everyday.

API is interested in handling this matter in a good and reasonable way so that we may not be forced to release the tapes in its entirety. We do not want to be party to causing unnecessary chaos before the elections. If you just come forward and confirm that there was a call you placed to API, that will enable API to be out of it and nobody will continue to demand that we air unedited tape, but that we can release the one with information that is already known to the public.

We will appreciate solving this matter this way in order to avoid unnecessary law suits that may come about.

It is my apology to you that we did not let you know that the conversation was being taped, and yet I expect you to know that being a public figure, such may happen.

We have decided to write to you after our discussion today with a US CIA official in Oslo.

— Chief Editor Korir, of African Press International, in an open letter to Michelle Obama about a conversation that was being denied as a rumor last week, but now made very-real by Death By 1000 Papercuts