The Great Presidential Election Of 2008 Is Now Officially U.F.O.: Undeniably Factually Over!!! 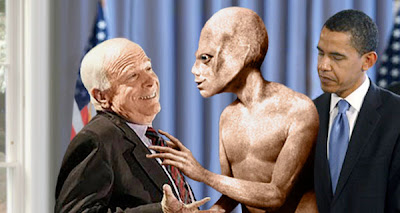 "WASHINGTON, DC - In a shocking reversal, the Alien has switched his endorsement from Barack Obama to John McCain.

— Reginald Cunningham III, on the most important political endorsement of the campaign season, in the Weekly World News.