They've Been Praying For A Win All Along 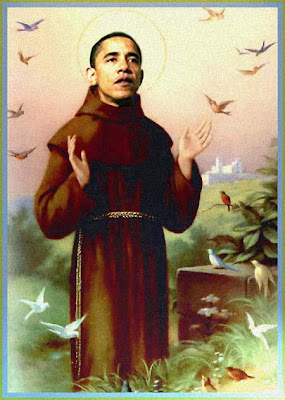 "If the Obama campaign reminds you too of a mass movement of true believers I suspect it is because the candidate himself has encouraged this perception. Early in the campaign the Hopemeister heralded his arrival with this verbal trumpet blast: 'We are the ones we've been waiting for!' Since then the terms most frequently associated with Obama and his supporters include 'cultish,' 'messianic,' 'rock star,' 'Kool-aid drinkers' and various combinations of the words Obama and robot. One wonders if the Democratic nominee hasn't studied the works of Eric Hoffer and Hannah Arendt to learn what it takes to lead a successful mass movement of true believers."

— Christopher Orlet, pointing out all the cultish aspects of the Obama campaign - which some say is getting "creepier and creepier" - and would be to any American Spectator.

You know the whack-jobs need to defeat: