Meditate On This Shit (And Lose Your Mind) 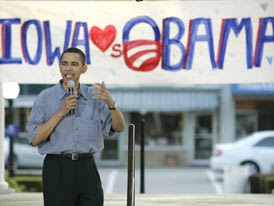 "Obama was set to spend the day on a campaign crush across the Midwest, with a quick stop home in Chicago to see his kids. He makes his first stop back where his run began, in Des Moines, Iowa, where he upset Hillary Rodham Clinton in the campaign's first contest."

— Mike Glover, unaware of the metaphysical implications of Obama's movement back to a NewAge "power spot", for My Way News.

Why's Barack going BACK to Iowa? He's clearly got Iowa locked up, so what's the point? Click here (and pay attention to the video you find there) to understand what's up with meditation, New Age, and politics.

Now, let's go back in time a little bit, to see how Obama chooses what may become our nation's new "friends" (all underlines are mine): 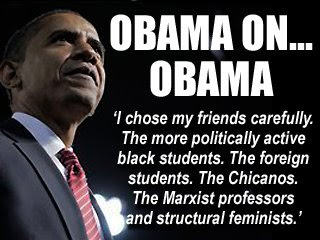 "Sen. Barack Obama drew his heartiest welcome of a two-day swing through Iowa in the state's capital of inner peace.

To the frustration of the cameramen in the Fairfield town square, Obama delivered his remarks facing east, with the setting sun behind him blotting out their shots. [He's willing to frustrate the cameras? A guy running for president? - TMR]

But here, there’s a power even higher than the television networks: Obama had positioned himself in alignment with the rotation of the earth, in accordance with the teachings of the Maharishi Mahesh Yogi, whose followers moved en masse to this small Iowa city more than 30 years ago.

The Maharishi’s transcendental meditators, along with vacationing pilgrims from the East Coast, turned out in large numbers in the town’s traditional green square to hear the Illinois senator deliver his stump speech on the night of July 3 — more people, Fairfield’s sheriff said, than had come out to greet a sitting president.

"I saw him and I thought, ‘Oh my god, this is somebody who could lead us into a new era,’” said Nancy Watkins, an international student adviser at the Maharishi University of Management.

The meditators cheered Obama heartily — not at his occasional gestures toward political red meat, but at the lines that sometimes leave other audiences in silence.

They were responding to the senator’s call for national renewal that, though perhaps more Christian than New Age in concept, fit comfortably into a town square hemmed by shops with names like “Revelations” and the “Healthy Inspiration.”

— Ben Smith, who almost "got" it, writing for Politico.com.

Feeling "Zen" yet? Me too - but that's just a natural state for: