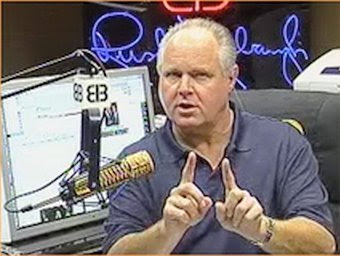 "My take on this is that we are all Americans and I am sick and tired of hyphenated Americans. Afro-American, Hispanic-Americans.

I am truly colour blind and I wish everyone else was. We Balkanise when we say only women can represent women in Congress and only Jews can represent Jews and only blacks can represent blacks. It's bullshit. We all want the same things. Prosperity and a decent education for our kids. Treating this country like it is stuck 50 years ago is bullshit; we have made more progress than anyone over this. Get over it. If Obama says stupid things I'm not going to say they are not stupid because he's black. He's running for President, for God's sake. It's the Left who has been racist by agonising about whether he is black enough. Is he authentic enough? Does he have a civil rights record? For me he's a liberal. That is reason enough to oppose him.

...Man-made global warming is a 100 per cent, full-fledged, undeniable hoax,...it's not even arguable in terms of science.

...We don't have the power to make cold weather warm. We can't make warm weather cold. We can't produce rain clouds. We can't steer hurricanes, we can't produce diddly squat and the idea that only advanced democracies are doing this with their automobiles is absurd.

Global warming is a religion. It has what all religions have which is faith, because no one can prove their religion. It has a Garden of Eden element, destruction brought by humanity then redemption for our sins by paying higher taxes and getting rid of our cars and planes.

...I hate people who feel rather than think. Most people feel they don't matter. When they are told they can save the planet, well, that gives their lives meaning. These stupid ribbons – breast cancer, Aids awareness, they say – 'I care more than you.'"

-- El Rushbo, echoing a major theme of TMR, while talking to London's Telegraph.

"Echoing a major theme" my ass - that is the theme - and if it's yours as well, and you won't be pushed around about it, then you're living your life with: