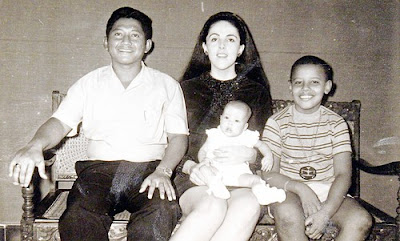 Oh boy - there's no way around it - this post has to get weirder than usual,...even for a disrespectful site dealing in politics and NewAge crap. And to me, it shows exactly how warped, nasty, disgusting, and corrosive, relativistic NewAge Democrats like to force everyone's life to become so, later, they can justify their votes for things we don't like by saying our noses have already been rubbed in it. And Andrew Sullivan, the NewAge nutcase who started foaming at the mouth when Sarah Palin came on the scene (brutally suggesting her son with Down Syndrome, Trig, really was her daughter's kid?) you'd better prepare yourself, because you have no one else to blame - here goes:

Barack Obama has a Communist "God Father" named Frank Marshall Davis (above) and it looks like he took several nude photographs of Obama's mother, Stanley Ann Dunham Soetoro (the woman in the top photo) posing in his apartment. And, as you can see in the links above, they're on the internet.

I shit you not.

Your unhinged NewAge ass certainly showed you really knew how to answer the candidate's call for an honorable campaign,...you sick fuck.

You, of all people, should pay your dues to: