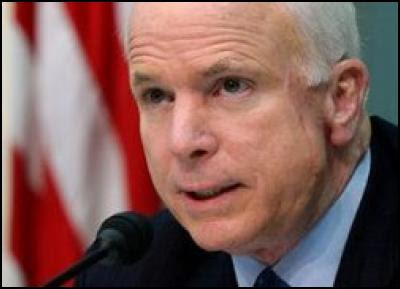 I stand athwart the rush of conservative ship-jumpers of every stripe -- neo (Ken Adelman), moderate (Colin Powell), genetic/ironic (Christopher Buckley) and socialist/atheist (Christopher Hitchens) -- yelling "Stop!" I shall have no part of this motley crew. I will go down with the McCain ship. I'd rather lose an election than lose my bearings.

First, I'll have no truck with the phony case ginned up to rationalize voting for the most liberal and inexperienced presidential nominee in living memory. The "erratic" temperament issue, for example. As if McCain's risky and unsuccessful but in no way irrational attempt to tactically maneuver his way through the economic tsunami that came crashing down a month ago renders unfit for office a man who demonstrated the most admirable equanimity and courage in the face of unimaginable pressures as a prisoner of war, and who later steadily navigated innumerable challenges and setbacks, not the least of which was the collapse of his campaign just a year ago.

McCain the "erratic" is a cheap Obama talking point. The 40-year record testifies to McCain the stalwart.

Nor will I countenance the "dirty campaign" pretense. The double standard here is stunning. Obama ran a scurrilous Spanish-language ad falsely associating McCain with anti-Hispanic slurs. Another ad falsely claimed that McCain supports "cutting Social Security benefits in half." And for months Democrats insisted that McCain sought 100 years of war in Iraq.

Moreover, the most remarkable of all tactical choices of this election season is the attack that never was. Out of extreme (and unnecessary) conscientiousness, McCain refused to raise the legitimate issue of Obama's most egregious association -- with the race-baiting Rev. Jeremiah Wright. Dirty campaigning, indeed.

The case for McCain is straightforward. The financial crisis has made us forget, or just blindly deny, how dangerous the world out there is. We have a generations-long struggle with Islamic jihadism. An apocalyptic soon-to-be-nuclear Iran. A nuclear-armed Pakistan in danger of fragmentation. A rising Russia pushing the limits of revanchism. Plus the sure-to-come Falklands-like surprise popping out of nowhere.

Who do you want answering that phone at 3 a.m.? A man who's been cramming on these issues for the past year, who's never had to make an executive decision affecting so much as a city, let alone the world? A foreign policy novice instinctively inclined to the flabbiest, most vaporous multilateralism (e.g., the Berlin Wall came down because of "a world that stands as one"), and who refers to the most deliberate act of war since Pearl Harbor as "the tragedy of 9/11," a term more appropriate for a bus accident?

Or do you want a man who is the most prepared, most knowledgeable, most serious foreign policy thinker in the United States Senate? A man who not only has the best instincts but has the honor and the courage to, yes, put country first, as when he carried the lonely fight for the surge that turned Iraq from catastrophic defeat into achievable strategic victory?

There's just no comparison. Obama's own running mate warned this week that Obama's youth and inexperience will invite a crisis -- indeed a crisis "generated" precisely to test him. Can you be serious about national security and vote on Nov. 4 to invite that test?

And how will he pass it? Well, how has he fared on the only two significant foreign policy tests he has faced since he's been in the Senate? The first was the surge. Obama failed spectacularly. He not only opposed it. He tried to denigrate it, stop it and, finally, deny its success.

The second test was Georgia, to which Obama responded instinctively with evenhanded moral equivalence, urging restraint on both sides. McCain did not have to consult his advisers to instantly identify the aggressor.

Today's economic crisis, like every other in our history, will in time pass. But the barbarians will still be at the gates. Whom do you want on the parapet? I'm for the guy who can tell the lion from the lamb.

— Charles Krauthammer - endorsing the McCaintosh - even on the Washington Post

Charles Krauthammer understands everything - even: