I've wondered why the media hasn't followed up on this since it happened:

Above is a video of the 3rd debate. Advance it to 3:30 and you hear John McCain accuse Barack Obama of launching his political campaign in Bill Ayers's living room, and Obama clearly saying, "that's not true."

But is it true? Of course it is - but, just like with the John Edwards Scandal, everything that bloggers have been discovering about Ayers and Obama is something somebody doesn't want the voters to know. Several mainstream media outlets and major newspapers - like the New York Times and the L.A. Times - have claimed that there is “no recorded basis” for John McCain’s statement that Obama launched his political career in Bill Ayers and Bernardine Dohrn’s living room. 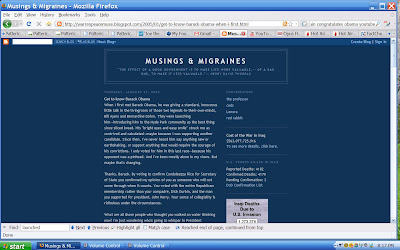 Click on the image above and you'll see a recently-removed, full-sized, screen shot from a January 27, 2005 blog post that was on Maria Warren's liberal blog "Musings And Migraines". It was saved by Patterico, a blogger at "Patterico's Pontifications" and Warren's post clearly says:

"When I first met Barack Obama, he was giving a standard, innocuous little talk in the livingroom of those two legends-in-their-own-minds, Bill Ayers and Bernardine Dohrn. They were launching him–introducing him to the Hyde Park community as the best thing since sliced bread." [Underlined emphasis TMR's] 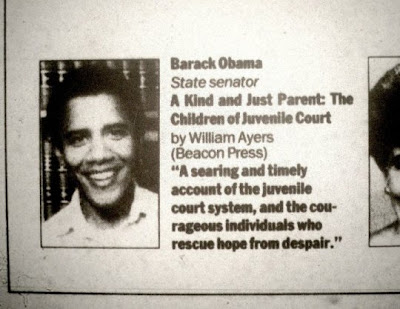 So what do we have here? We have Obama telling a bald-faced lie to the American people in the third debate. We now know he also told a bald-faced lie to the American people in his debate with Hillary Clinton when he claimed Ayers was just a guy in his neighborhood. We also now know Obama, Ayers, and Dohrn had to have had a much deeper relationship than Obama has claimed if Ayers and Dohrn were selling Obama as "the best thing since sliced bread." (Why would anybody say that if they didn't know a person well? TMR has traced them all the way back to 1987.) And now we know that all the other stories about Obama, Ayers, and Dohrn should be given much more weight - and journalistic study - than they have been so far.

TMR will be more than happy to answer any questions regarding Barack Obama's many lies, but, right now, I'm happy to finally be able to settle this one, and end a solid post with the time-honored street phrase: