Our Race To The Bottom 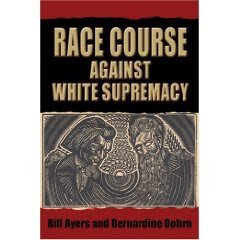 "Just when you had wished you had indeed heard the last of Bill Ayers and Bernardine Dohrn, it turns out they are publishing a new manifesto described in brief on Amazon.com.

What makes the book blurb - this one apparently not written by their long time, umm, colleague, co-education policy wonk, fellow intellectual and, yes, neighbor Barack Obama - worrisome is that it links what Ayers and Dohrn says is America's continuing sin, racism, with their views on war.

In other words just as Barack Obama moves to the White House, these two destructive figures out of the past are about to advocate an entire new world view for America built around their curious race-centric obsession."

— Steve Diamond, keeping us "in the know" on people we wish we never heard of, but that's Global Labor and Politics.

Ayers, Dohrn, and this book are shit. You'd do better with: