Naked (Wondering What's Under Those Pajamas,...) 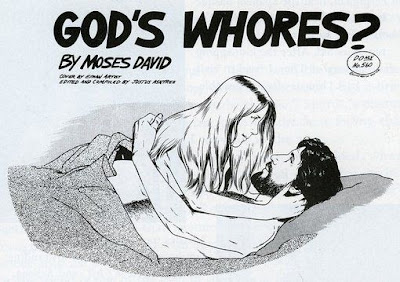 Now this is weird:


Pajamas Media has an article called "Cults: The Mind Enslaved."

It's not like PJMedia to wander into my neck of the woods, and as with so many others, it's an article on being a full-blown cultist as opposed to the much more prevalent phenomena of being surrounded by cultish thinking - so it hardly applies to most people - but, still, it's welcome:


Nobody joins a cult; people are attracted to cultic groups by an apparent good. This could be legitimate elements borrowed from a non-cultic faith, the “high” experienced at a self-help conference, or the camaraderie and affection offered by a new group of caring people. These attractions fill a need experienced by a vulnerable recruit. The benefits prime the new member to identify the cult as the source.

Cult members invariably begin to experience a discrepancy between cult teaching and what he or she observes. Mr. Goldman spoke of knowing LaRouche published antisemitic literature while the leader claimed to have a special love for Jewish people. Confronted with inconsistencies, the subject must choose between personal thinking and the cult-knowledge with all its perceived benefits. Once a person consciously repudiates his or her own mind, defending against intruding reality becomes imperative. As the cult-thought becomes more and more invasive, the member no longer lives life based on the normal ebb and flow of information, analysis, and personally selected behavior. Instead, the subject defaults to free-standing dictums that have no root in reality.

The mind continues to receive sensory input from the world and this causes “dissonance,” a struggle between suppressed reason attempting to reassert itself and the post-analytical intellect. …

The Cult Mind frequently violates conscience, that internalized voice of universal right and wrong. For Jason Beghe, it was continuing to recruit for Scientology when he saw that expensive training was not helping him. For David Goldman, he knew assisting an antisemite spread the “Jewish Banking Myth” was wrong, but he was not willing to substitute reality for the emotional comfort of LaRouche’s inner circle.

The need to limit contact with people who live according to reason explains alienation from family, friends, and non-members. Living extensions of the Gnostic group-mind are only comfortable with people who affirm the illusion in which they live. Within a cult, subjects serve to continuously monitor one another’s level of blind adherence to cult ideology and to suspension of critical thought. Deviations such as questioning or criticism are met with social sanctions that vary in intensity depending on the cult. Anyone who threatens the unity of thought is deemed an enemy. Such a person threatens the essential psychologically dependent state that constitutes the essence of the cult.

The Gnostic Mind is often compartmentalized and people who eschew reason in one area of life are able to function at high levels of professionalism in others. The more dangerous cults are precisely those whose members seem relatively normal on the surface because they offer fewer external warnings to the vulnerable.

Yep, all that sounds about right, but I still can't help wondering why is PJMedia covering it? And why now? Tom Cruise's troubles? Moon's death? A warning on Mormonism?

Or maybe it's just a fluke. A one-off. Or,…maybe cultism is being seen as the very problem I've been saying can't be ignored.

No, I doubt that - the framing of this issue as someone else's problem - something you don't concern yourself with until it's too late (which, by then, is too late) is still too prevalent.