Shake Me And Say, "You Were Having A Nightmare,..." 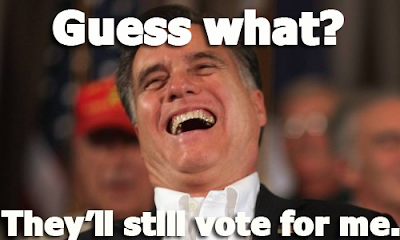 Ann Romney's completely into quackery, she and Mitt are both in a crazy con man's cult, and now we find he even believes in pseudoscientific nonsense:


I do believe in basic science. I believe in participating in space. I believe in analysis of new sources of energy. I believe in laboratories, looking at ways to conduct electricity with -- with cold fusion, if we can come up with it. It was the University of Utah that solved that. We somehow can’t figure out how to duplicate it.

Good Lord, the man's delusional to the max - a total cult brain:

Hopes that a new kind of nuclear fusion might give the world an unlimited source of cheap energy appear to have been dealt a devastating blow by scientific evidence presented here.

In two days of meetings lasting until midnight, members of the American Physical Society heard fresh experimental evidence from many researchers that nuclear fusion in a jar of water does not exist.

Physicists seemed generally persuaded as the sessions ended that assertions of "cold fusion" were based on nothing more than experimental errors by scientists in Utah.

Dr. Steven E. Koonin of Caltech called the Utah report a result of "the incompetence and delusion of Pons and Fleischmann." The audience of scientists sat in stunned silence for a moment before bursting into applause.

Referring to a possible error in temperature measurements by the Utah group, Dr. Walter E. Meyerhof of Stanford University offered this contribution:

Tens of millions of dollars at stake, Dear Brother, Because some scientist put a thermometer At one place and not another.

Dr. Brophy of the University of Utah said the Utah team, like all other scientific groups, welcomed criticism by other scientists.

"Any scientist can be proved to be slightly in error or greatly in error," he said. "If Dr. Pons and Dr. Fleischmann have made errors they will acknowledge them. But so far none of their critics have published their criticisms, and they are conducting science by press conference, as we have been accused of doing."

Dr. Brophy said his group was not disturbed by the vote by eight of nine physicists calling the Utah experiment dead. "Pons and Fleischmann will be speaking themselves next Monday at a meeting of the Electrochemical Society in Los Angeles, and the vote there would be likely to be different," he said.

Dr. Jones himself spoke at the meeting, and although participants questioned him sharply about his experiment, questioning was generally friendly.

He drew cheers and laughter when he concluded his talk by saying, "Is this a shortcut to fusion energy? Read my lips: No!" He defended his own experiment, describing his results as a "fragile flower" that would never grow into a "tree" producing useful energy, but could nevertheless "beautify" science.

Yes, they LAUGHED at him - but Mitt believes (The nut job doesn't even know cold fusion ISN'T a way to "to conduct electricity"). BTW, the delusional "Dr. Jones" involved in this fiasco, one Steven E. Jones, was let go from Mitt Romney's favorite "charity" - Brigham Young University - after it was discovered he was also a 9/11 Truther. Yikes!

As a conservative, I have only one response to what you guys are doing, in trying to elect Mitt Romney to run our country:

Someone, somewhere, wake me up!