Watch Out For Flying Debris (Or Even Flying Monkeys) 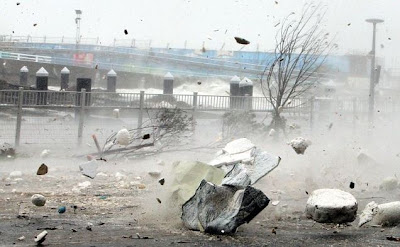 Even with The Master in theaters - and with Scientology's twisted history of battling the government until L. Ron Hubbard's death and beyond (AND even with the latest tales of three deaths in Oklahoma and the cult operating a mini-concentration camp in California) these politicians still have the audacity to spin us, I mean really whipping the truth around, until we can't be spun no more:


Three U.S. congressmen and a top-level government official attended the opening of the Church of Scientology’s National Office in Washington, D.C., Thursday.

Their attendance marked a significant endorsement from members of a government that was once partially at war with the organization.

“I want to thank L. Ron Hubbard for recognizing that courage is not rewarded but it is valued,” said the congresswoman. L. Ron Hubbard was the church’s founder.

And - along with remembering The People's Temple cult leader and mass murderer, Jim Jones, being welcomed to head the San Francisco Housing Authority by supervisor Harvey Milk and mayor George Moscone - "what I see" is the phrase, "You can fool some of the people some of the time,…" being as relevant today as it ever was.