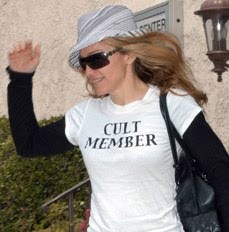 I keep trying to tell you there's a clear connection between the American "progressive" contingent's love for NewAge spirituality, gullibility, and lying, with the economic mess we're in - the connection being the idiotic acceptance of one has led to the other - but, now that Madonna's African school deal is falling apart, maybe you guys can finally figure it out for yourselves - or maybe not:

Courtenay Geddes, a wealthy heiress from Pasadena, California, has sued the Kabbalah Centre of Los Angeles and all of its entities alleging a major swindle. Geddes’s suit — for $20 million– was filed in Los Angeles Superior Court in February 2011. The news of the lawsuit comes on top of headlines concerning Kabbalah’s Raising Malawi charity reneging on a promise to build a girls academy in Malawi with pop star Madonna. As I reported exclusively yesterday, the Kabbalah Centre and Madonna have now hired a top spin doctor, Mark Fabiani, to protect the image of the singer and the organization.

Geddes didn’t name Madonna as a defendant in her suit, but she named everyone else from the Berg family to John Larkin of Larkin Business Management. Larkin is the accountant for Kabbalah. (His firm was sued in 2009 by the Black Eyed Peas for failing to file a decade’s worth of tax returns.)

In her suit, Geddes claims that in 2007, two years after she joined the Los Angeles chapter of Kabbalah, she proposed several ideas to the Bergs and to Larkin about educational projects for their subsidiary, Spirituality for Kids–now known as Success for Kids.

Geddes, whose grandfather was a German American billionaire whose considerable trust she inherited, says the Bergs and Larkin loved her ideas. She wound up investing around $500,00 in the effort. At the same time, she also became involved, she says, through other Kabbalah Center members, Donald and Orly May. She invested $800,000 with them in a real estate scheme. She’s now also suing them as well, separately. Geddes is suing the Centre, the Bergs, Larkin, and other defendants for $700,000 that she laid out, plus damages.

In her lawsuit, Geddes alleges the following: “Geddes, while looking for spiritual enlightenment and personal growth and improvement, was manipulated by Kabbalah Center and the other defendants who advantage of her sincere, trusting nature to deprive her of her monies…Kabbalah Centre has a historical pattern and practice of defrauding people by soliciting monies for various projects that never come to fruition. Geddes is but one of numerous people who have been taken advantage of the by Defendants by leveraging their position in the community as spiritual guides.”

All that money, thrown down the toilet, and for what? And don't think Madonna isn't going to be dragged into it - she will. The Material Girl mocked the anti-cult crowd when we tried to warn her (see photo) but now it's all unravelling and, like all the others, no one gets away once that happens:

It's just a matter of time.