A Question For The Many Followers Of The Dalai Lama: When He Finally Steps Down From Power Will You Ever Finally Stand Up For Yourselves? 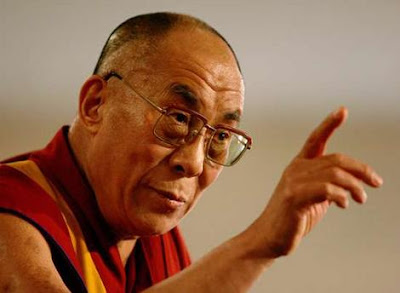 "Buddha" is the number one search term for TMR and, considering the number of people who think Buddhism and all that flows from it is cool, I (and a few others) don't see how most supposedly-educated people in the 21st Century can hold their heads up in public:

Every Western liberal’s favourite man-god has finally announced that he will relinquish political authority and allow his people to choose their own leader. Yes, the Dalai Lama, doyen of the West’s metropolitan chattering classes and hero of every suntanned seeker of spiritual enlightenment, has decided that 52 years is rather long enough to have claimed to speak on behalf of the Tibetan people (10 years longer than Colonel Gaddafi has been making similar BS claims in relation to Libya) and that the time has come for a leader “elected freely by the Tibetan people”. One question springs to mind: what took him so long?

I have never understood the Western hippyish love-in with this giggling monk from the East, where everyone from Hollywood royalty (Richard Gere, Sharon Stone) to literal royalty (Prince Charles) treats him as some kind of unfathomable well of godlike insight. After all, this is a bloke who claims to foreswear worldly goods yet who once guest-edited French Vogue, a mag packed with photos of half-naked women holding handbags that cost more than my house. He’s also done an advert for Apple, which I suppose is marginally better than doing one for BP, and he frequently turns up at glitzy celeb balls held in his honour, including one at which Sharon Stone introduced him as “Mr Please, Please, Please Let Me Back Into China!”, silly bint that she is.

Also, the Dalai Lama has the sorts of views on women and ethnic minorities which if they were uttered at an Islington dinner party would lead to half the guests instantly text-messaging Trevor Phillips to complain. One expert describes Tibetan Buddhist theocracy as “relentlessly misogynistic”. The Dalai Lama says gay sex is “unnatural”. In 1993 in Seattle (where else?) he told a fawning audience of students and part-time Buddhists that “nature arranged male and female organs in such a manner that is very suitable… same-sex organs cannot manage well.” Someone needs to send his Holiness a gay-sex manual. It is striking that some of the very same latte-sippers who get hot under the collar about the Pope’s hang-ups over homos and women also decorate their homes with the paraphernalia of a religious figure who believes the exact same stuff. [Photo of the Dalai Lama with his "friend", the Nazi Heinrich Harrer.]

I guess I'll just have to accept that most people's beliefs are so superficial and pathetic, I'll never be able to expect anything more than blind cultists, searching for invisible "energy", by following a bunch of nobodies claiming to deliver magic that never appears.