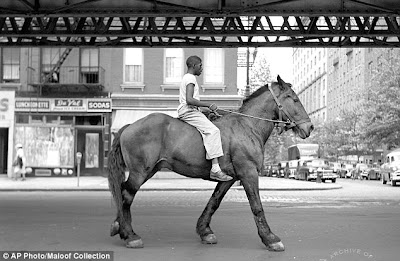 Justice can move too damned slow sometimes. Especially when the murder involves a cult - and occurred just a few blocks from your house:

When an attorney for one of the defendants in the killings of Oakland newspaper editor Chauncey Bailey and two other men tried to get the murder trial moved out of Alameda County last year, he compared his client to Nazi lieutenant Hermann Goering.

Attorney Gary Sirbu argued that trying Antoine Mackey next to Yusuf Bey IV, the former leader of Your Black Muslim Bakery accused of having ordered the killings, would be like trying Goering next to Adolf Hitler.

The publicity surrounding the now-defunct black empowerment group is that widespread, and the bakery's former leader is that notorious, Sirbu said.

Superior Court Judge Thomas Reardon may well have appreciated Sirbu's dramatic flair - the jurist acts and sings in local theater productions. But Reardon ultimately ruled that the case would stay in Oakland, and that Mackey and Bey, both 25, would be tried together.

Today, after a final round of jury selection, prosecutor Melissa Krum will present her opening remarks in a trial that is being closely watched by journalists and First Amendment advocates.

Bailey's slaying was shocking not just because of the way it happened - he was shotgunned in broad daylight - but because of the explanation that emerged for the killing. The Oakland Post editor was shot, prosecutors believe, to shut him up.

Bailey was working on stories about a group whose image had plunged far from its early days as an advocate for healthy eating in the black community.

Reardon has said he will allow prosecutors to tell jurors of a litany of crimes involving bakery members. They include shootings, the kidnapping of two women and the torture of one of them, the vandalism of two liquor stores to curb alcohol sales, and a sexual-assault case against the bakery's late founder that Bailey had covered.

The 57-year-old Bailey was walking from his Lake Merritt apartment to his Oakland office on Aug. 2, 2007, when Devaughndre Broussard, who had worked as a handyman at Your Black Muslim Bakery, killed him with three shotgun blasts near the corner of 14th and Alice streets.

For the whole story, check out Your Black Muslim Bakery on TMR.