I Ain't No Fashionista But, If You Ask Me, James Arthur Ray, And Oprah, Look GREAT In Orange! 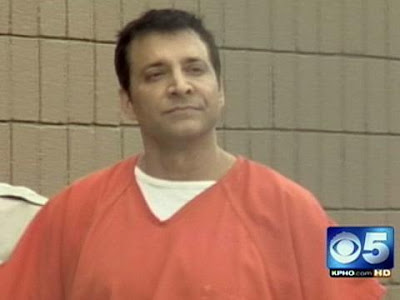 You've got to hand it to James Arthur Ray, the man was about as focussed as one can get:

Another witness in the sweat lodge trial against self-help guru James Arthur Ray brought some bizarre insight into the Spiritual Warrior retreat that ended in the death of three people.

On the stand Friday, Linda Andresano explained how Ray told participants to write about their early sexual experiences in their journals, between events, at the retreat.

She also said that after a seminar about the samurai tradition, Ray had them play a game that ended in a symbolic mass suicide.

Andresano also said players of the game were killed when they made eye contact with people predetermined to be "ninjas."

Those that were "killed" in the game were then taken to a symbolic cemetery by people dressed in black cloaks.

An attorney questioned Andresano about the game, asking, "And what happened to the survivors, so to speak?"

"We all died anyway," responded Andresano.

Because Oprah's pal, AKA "God", said so. (Has anyone who was there ever had the opportunity to thank Oprah for her endorsement of Ray yet?) Oh well, at times like this it's so important we use Oprah's "Best Life EVAH!!!" NewAge training, to find the bright side of a situation - like this:

It's impossible anybody got ripped-off at this thing because, before they showed up, they were only dead on the inside,...