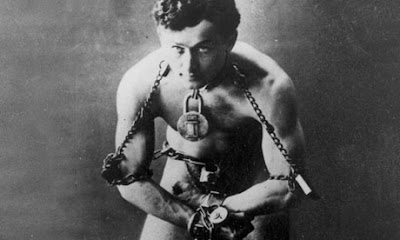 Oh look - It's Harry Houdini's birthday! And even Google is in on the act with a graphic. Of course, they indulge in many things Houdini hated, but still,...newspapers and other journalistic organs (which can no longer be counted on to give us news) are running articles about everything "Houdini" but the obvious, especially to Houdini fans:

The great man would've been appalled by the world we've made in his absence.

Sylvia Browne on Montel pretending to talk to the dead? Oprah Winfrey and Ellen marketing "The Secret"? I could go on, but you get the point. What you don't get, though, is my real point:

The travesty on this day isn't that these con men and women and their scams, which have always been with us, are still trying to get away with this crap - the embarrassment is that, in 2011, they have an audience.

A huge audience. Of adults. Who ought to know better. But don't. So they're idiots. Because Houdini proved it was all bullshit before he died in 1937.

Even worse, the rest of you sit idly by and allow it to go on. Don't say you don't.

Are you fighting for critical thinking to be put in our school curriculum? No.

Have you told your local paper to stop it's Horoscope? No.

Have you tried to shut down your local psychic? Of course not.

But Harry Houdini would've been doing just that - that's what he did while he was alive, people.

So is Google, or anyone else, out there truthfully celebrating Harry Houdini's birthday? Or are they just doing more of what this era is becoming so disgusting for - mouthing empty platitudes backed by no convictions what-so-ever? Yeah, that's what I thought. But don't forget as you look on smugly:

You - yeah, YOU reading this - you're not left out of that statement either, and Harry Houdini would've told you so. That's why I'm telling you so. That's how you celebrate Houdini's birthday.