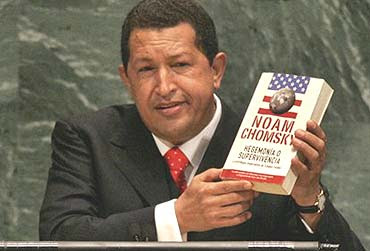 Hugo Chávez, he of the televised multi-hour conspiracy theory rant - and Noam Chomsky-loving, necrophiliac, socialist cult of personality in Venuzuela - is at it again. Keep in mind, this is the guy who had Sean Penn and Oliver Stone, amongst others, hooked on his every word during the Bush administration. (He famously claimed to smell "sulfur" emanating from George W. Bush, back in 2006, when Chávez spoke after him at the U.N. in New York.) Oliver Stone even went so far as to make a documentary about him, claiming Chávez is "misunderstood". See if you understand this:

Capitalism may be to blame for the lack of life on the planet Mars, Venezuela's socialist President Hugo Chavez said on Tuesday.

"I have always said, heard, that it would not be strange that there had been civilization on Mars, but maybe capitalism arrived there, imperialism arrived and finished off the planet," Chavez said in speech to mark World Water Day.

Got that? Understand it? I do - the man runs a cult - and it's "logic" like this that absolutely proves it. I don't care how high he's risen in politics: