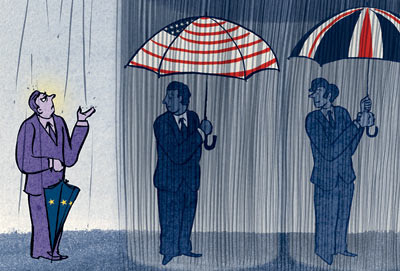 "We should not allow,...an ever closer liaison with France. Why is this not a good idea? The first reason is that France has rarely been a reliable or trustworthy ally,...Time and again we have paid in blood and gold for our alliance with her, and usually received precious little thanks for our sacrifices,...

Look at it another way. Which alliance has benefited this country more: the so-called special relationship with the United States or the Entente Cordiale? Whereas France turned out on two occasions last century to be a country that needed rescuing, America has twice done her bit - three times, if you include the Cold War - to help rescue us and the rest of Europe.

A moment's thought about what has taken place between our two countries over the past hundred years,...should be enough to remind us why France and Britain can never be - and should never be - the very best of friends."

- Stephen Glover, telling it like it is, while writing for The Daily Mail
Posted by The Crack Emcee at 4:48 AM