Listen Here, Satan, You And I Have Got To Have Ourselves A Little Talk About The NYT,... 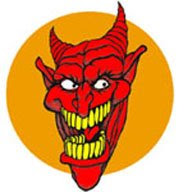 To kill a man, Alejandro Gallegos García explains, all you need is a black cloth doll, some thread, a human bone and a toad. Oh, and you must ask the devil permission, in person, at a cave in the hills where he is said to appear.

Assuming you have these things, plus the green light from the prince of darkness, you simply lash the doll to the bone, shove it down the unfortunate toad’s throat, sew up its lips and take the whole mess to a graveyard, reciting the proper words.

“The person will die within 30 days,” Mr. Gallegos said matter of factly, as if he were talking of fixing a broken carburetor. (The toad dies too, by the by.)

“There exists good and bad in the world, there exists the devil and God,” he went on, turning a serpent’s fang in his rough fingers. “I work in white magic and in black magic. But there are people who dedicate themselves only to evil.”

From James C. McKinley's article on witchcraft in Mexico, which appeared in The New York Times. (1950's style portrait of "Satan" by The Crack Emcee)

Just a few thoughts on this piece: why does The New York Times keep feeding us this kind of shit? Is their credibility so shot full of holes they just don't care about their reputation anymore? I mean, if I needed to read the words of some idiot from Mexico, talking some "Mary Window in the bathroom" bullshit, can't I just give a fucking illegal immigrant some bad acid and cut out the middleman? Do I really need a newspaper for this? They're not going to do anything about it, so why bother covering it? And, considering this exact same type of scam was just debunked in India (which I notice the NYT didn't bother covering, just as they don't do anything on the work of James Randi or any other skeptics) isn't the NYT just announcing it's editors are as gullible as the next fool?

Next, in the article, they say this bullshit artist, Alejandro Gallegos García, "melds European and native traditions in his work, a special brew of occultism he learned from his uncle." Got that? They said it: "occultism". So there is a world-wide cadre of believers in the occult - it's not just my imagination - and it's got European traditions (also not just my imagination). One guy, Héctor Betaza Domínguez (who calls himself a "“master of occult sciences") says "people come to see him from all over Mexico and from major cities in the United States" so I ain't imagining what I'm finding, here, either. Why isn't the NYT asking hard questions about that shit? What are these people doing? Why do we allow these fruit loops to move amongst us, anonymously, spreading their nonsense and messing up the lives of people who are unaware of what they do? Check out this quote from the same article:

The Rev. Tomás Alonso Martínez has the unenviable job of parish priest in a town best known as a haunt of the devil and witches. “It’s farce,” he said, “a lie, a fraud.”

In his five years in Catemaco, Father Martínez says he has seen so-called witches practice all sorts of confidence schemes, extracting money from gullible and vulnerable people.

One common trick is to tell someone he is hexed and then remove the hex for a fee. Another is to tell people they are sick, then offer them a traditional cure for an outlandish sum.

“They attribute to themselves power they cannot have,” the priest said. “The fundamental problem that exists with these people is that there are people who believe them. Anyone can set themselves up as a witch.”

Got it? These are criminals, who prey on the gullible, but nobody goes after them. So they freely cause all kinds of havoc in the lives of the innocent - the "collateral damage" - the people who don't know their friends, family members, whoever, are indulging in this nonsense and funding quackery, criminality, and domestic mayhem. The cost to individual lives, not to mention society, has to be enormous.

This whole enterprise - the article, the "practitioners", the gullible - make me sick to my stomach. Good people are getting hurt. But all it means to the likes of the NYT is a chance to run another "human interest" story. The bastards:

Newspaper investigations used to also be known for doing some good.
Posted by The Crack Emcee at 12:32 AM