Sorry: You Guys Made It Our Business - All Of It 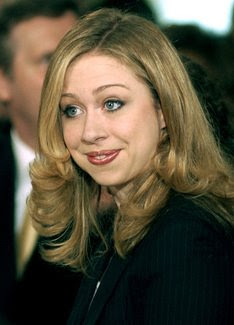 "I do not think that is any of your business."

- Chelsea Clinton's reply when asked whether her mother's credibility had been hurt during the Monica Lewinsky scandal.

Methinks, if Chelsea's dumb enough to try and play "public figure" in this campaign, the poor girl should also try and fully comprehend the extremely-difficult position her lying parents have put her in - namely, on her back - with her legs behind her head.

So (purely in an effort to help, mind you) TMR's gonna try and gently make her aware of the impossible situation she's wandered into - fuck, y'all, somebody's gotta do it:

Several times, in the White House (which belongs to us - not your family) your "dad" put a cigar in an intern's you-know-what, while having her do you-know-what - with your mom in the next room, fully aware that your "dad" does these types of things from time-to-time. Then he smeared the poor girl's name (by telling everyone they worked with she was crazy) before he went on TV and lied to all the rest of us about it. Then your mom attacked everybody, and blamed a "vast right-wing conspiracy" for it, smearing all the good people who didn't make it to the orgy.

So, when the nice man asked if your mom's "credibility" had been hurt - which is a fair question because president's need credibility to lead - you're not doing anybody any favors with that prepared stance of pretending to get all huffy about it, because, except for the sycophants, nobody's buying it. No, Sugarplum, nobody. You're a family of hillbilly liars and, I'm sorry to say, anybody with a working brain in their head knows that to be a fact.

By the way, Sweetheart - speaking of ugly facts - did anybody ever tell you who your "real" dad is?
Posted by The Crack Emcee at 12:47 AM